An odd Victorian in Eureka, California, manages to haunt the entire world 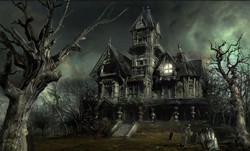 This scary Carson Mansion makeover by Daniele Montella is one of the world's most popular haunted house images.

"I’m both fascinated and repelled by the mansion, the same way I’m repelled by the holes in the seed pod of a lotus plant but still want to touch them." -- Joy Lanzendorfer

As the autumn darkness and Halloween creep closer, you might be spooked to find out that one of the Golden State’s most photographed houses, a charming Queen Ann masterpiece on the North Coast, has a diabolical dark side.

The circa 1885 Carson Mansion, which looms over the Eureka waterfront, does more than serve as a backdrop for photos by tourists. It has taken over the physical and digital universe as an architectural supermodel of strangeness.

The Carson Mansion, while noted for its unrivaled redwood woodwork and architectural details, has influenced eerie imaginations from Hong Kong to Hollywood.

For example, it served as a template for Mystic Manor, a haunted house in the Disney Hong Kong theme park. When sketches were unveiled before its 2013 opening, they generated considerable enthusiasm among the Mickey Mouse set.

MiceChat.com, a popular online news blog that covers the Disney universe, polled its users as to the probable source of inspiration. A few pointed to the Morey Mansion in Redlands. But the majority named the house that William and Sarah Carson built on a hill overlooking the Victorian seaport.

"It struck me that the Carson Mansion in Eureka, which I suggested would be a great building to house an attraction, looks a lot like Mystic Manor," one MiceChat commenter mused.

Ray Hillman, a tour guide and historian in Eureka, concurred. “There’s no doubt it’s the Carson. They just doodled a tiny bit with it and added an onion dome.”

Visitors taking selfies in front of the Eureka home casually remark that it reminds them of an Alfred Hitchcock movie, a statement closer to the truth than they realize.

When Random House released "Alfred Hitchcock's Haunted Houseful: Nine Cool Stories About Haunted Houses and Ghosts for Boys and Girl" in 1961, the cover featured the cartoonized face of the suspense film director alongside a familiar spooky Victorian.

“That’s the Carson alright,” said Hillman, an expert in Victoriana, citing identifying details like the gables and the arrangement of a sunburst panel and half circle on the tower. “The cover artist must have had photos of the mansion,” he said.

Search images on the Internet for the keywords “haunted house” and the results feature a malevolent masterpiece by Italian artist Daniele Montella, a riot of twisted dead trees, gloomy clouds and decaying grave markers framing a dilapidated house, unmistakably the Carson Mansion, which he created more than a decade ago.

“It happens that [people] still ask me about that image, usually close to Halloween,” Montella said.

Another is a purplish collage, starring the Eureka landmark, that ran with a story that GQ magazine posted in August, The 11 Most Influential Haunted Houses.

The Carson has hypnotized graphic artists across the globe, including Canadian Arlen Nielson who morphed it into chilling desktop wallpaper, Englander Daniel Norbury, who transformed it into a scary video game, and Maltan Bryan Camilleri, who turned it into a frightful mansion poster.

Why so much haunted art based on the Carson? Number one, it’s known as the most photographed Victorian in America and, as such, populates many online stock photo galleries.

Number two, the lolling gingerbread house, now the home of a Eureka civic club, is an irresistible architectural oddity, a riot of styles and features crammed with turrets, gables, eaves, curlicues, fans and glass.

"It’s a handsome house, yet something about it bothers me. Every inch seems covered in carved woodwork." wrote novelist Joy Lanzendorfer in an essay on Victorian fiction in the Los Angeles Review of Books in October.

The house’s primary feature of fright is the imperious grand central tower, topped by a Hitchcock-ian cupola, which looms over the eastside of the Eureka waterfront.

"The flamboyance of the 100-foot-tall structure is imposing, just by its sheer size," Hillman said.

To celebrate the spooky season, Hillman is offering a promo price in October and November on his Pride Enterprises tours of Old Town Eureka, which spy on the spooky mansion from the historic waterfront district (707-407-6834, redwoodeurekatours@yahoo.com).

So will Eric Volmers, a local history teacher and proprietor of Old Town Haunted History Tours who, after a pandemic hiatus, plans to resume Covid-safe tours Halloween week, should conditions permit. (oldtownhauntedhistorytours.com, 707-672-5012, hauntedhistorytours@hotmail.com).

The real Carson Mansion, photo by Cory Maylett, is a more welcoming place.