Angelica Ross and Her Company TransTech Social Enterprises Join the #March4TransEquality on Washington, D.C. to be held on September 28, 2019

About the National Trans Visibility March (NTVM): The Ties That Bind Us - On September 27-28, 2019 we will march in solidarity in support of the passing of the Equality Act and inclusion for the Trans community. We encourage all to #March4TransEquality while demanding justice for those whose lives were taken through senseless acts of violence and murders. 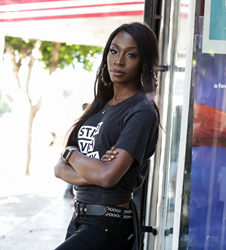 "Our lives have always been on the line. This is why we march," Angelica Ross

Angelica Ross is an American businesswoman, actress, and transgender rights advocate. After becoming a self-taught coder in the early years of her career she went on to become the founder and CEO of TransTech Social Enterprises, a firm that helps employ transgender people in the tech industry Melissa Harris Perry brought more attention to the firm in 2015, choosing Ross as her show's first "Foot Soldier" of the year. Ross began her acting career in the web series Her Story. In 2016, the series was nominated for an Emmy Award for Outstanding Short Film for Comedy or Drama. Ross also made a guest appearance that year on the TV series Transparent. She stared as Candy Ferocity in the critically acclaimed T.V. show FX series Pose. Angelica Ross was recently cast to play in the next season of American Horror Story 1984.

Ms. Ross company TransTech Social Enterprises will partner on the virtual march on September 28, 2019. In addition, Angelica Ross will be a speaker at the March and an honored recipient at the Torch Awards. TransTech is an inclusive and empowering space for transgender, gender nonconforming, and non-binary people.

Angelica Ross states, "Our lives have always been on the line. This is why we march."

TransTech Social Enterprises is an incubator for LGBTQ+ Talent with a focus on economically empowering the T, transgender people, in our community. TransTech is a co-working, co-learning community dedicated to empowering trans, lesbian, gay, bisexual, queer people and allies with practical, career-ready skills so they can push themselves up to the next level in their lives. TransTech members learn to create careers that are both independent of their multiple identities, but also uniquely infused by them. Ross was a featured speaker at the 2015 White House LQTQ Tech and Innovation Summit.

The #March4TransEquality weekend will begin Friday night September 27, 2019 with the Torch Award Ceremony honoring TGNC/NB leaders for their more than 15 years of national service. The ceremony will take place at the Crystal Gateway Marriott in Arlington, VA. Recently, the #March4Transequality was recognized by The United States Library of Congress for the website for inclusion in the library's historic collection of internet materials related to the LGBTQ+ Politics & Political Candidates Web Archives.

Registration for the National Trans Visibility March is suggested, but not required. Donations from all in any amount are welcome. Donations of at least $25 will receive a National Trans Visibility March t-shirt and other items. The Torch Awards are a separate, ticketed event. For more information, register for the NTVM or purchase tickets to The Torch Awards please go to transmarchondc.org. Make your pledge today with the National Transgender Community and become a partner in the first visible #March4TransEquality historic movement to come to our nation’s capital.