The Russ George Agency, a locally owned insurance company with offices serving the greater Phoenix area, is joining the Arizona Animal Welfare League in a charity drive aimed at providing stray cats and dogs in the area with critical care and a new home 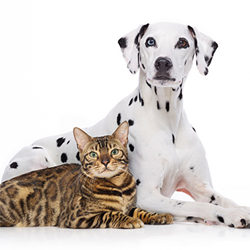 The Animal Welfare League has saved thousands of animals to date, but there remain a large number of unwanted, injured, and homeless dogs and cats that need our help.

The Russ George Agency, an Arizona-based insurance firm that provides coverage to hundreds of businesses and families in and around the Phoenix area, is teaming up with the Arizona Animal Welfare League & SPCA in a charity effort to save, shelter, and re-home neglected animals in central Arizona.

The AAWL is a no-kill that does not support or advocate for euthanizing animals, and instead concentrates on rescuing, rehabilitating, and finding new homes for neglected, homeless, and stray animals. Founded in 1971 by a group of concerned animal lovers, AAWL is now an affiliate of the SPCA. The AAWL has saved, treated, and re-homed nearly 5,000 animals since its inception.

“The Animal Welfare League has saved thousands of animals to date, but there remain a large number of unwanted, injured, and homeless dogs and cats that need our help,” says Russ George, founder and manager of the Russ George Agency.

Mobilizing a large network of personal and professional contacts, George and his team are reaching out to families and businesses in the area via email and social media to raise awareness of the AAWL charity event. The Russ George Agency also plans to publish a full page article on the charity drive in this month’s edition of “Our Hometown,” an online magazine produced by the firm: http://www.russgeorgeagency.com/Our-Hometown-Magazine_39.

Assisting the efforts of the AAWL is only the first of many charitable endeavors planned by the Russ George team. As part of an ongoing community involvement campaign called “Agents of Change,” the firm plans to work with at least one new Arizona charity every other month.

Readers who want to join George and his team in supporting the AAWL during this charity event are invited to stop by the firm’s website and make a direct contribution to the cause here: http://www.russgeorgeagency.com/A-Safe-Haven-for-Our-Cats-and-Dogs_12_community_cause. Readers interested in keeping track of new charities supported by the Russ George Agency are invited to bookmark the firm’s Community Cause list here: http://www.russgeorgeagency.com/community-cause.

About The Russ George Agency

As a Personal Finance Representative in Phoenix, Arizona, agency founder Russ George knows many local families. His knowledge and understanding of the people in his community helps provide customers with an outstanding level of service. George and his team look forward to helping families protect the things that are important - family, home, car and more. They can also help clients prepare a strategy to achieve their financial goals. To contact an expert at the Russ George Agency, please visit http://www.russgeorgeagency.com/ or call (480) 705-0990.