Almost a Year after the Sandy Hook Elementary School Shootings, Grieving Mother-Turned-Author Scarlett Lewis, and Acclaimed Author Anne Lamott, Share Their Journey to Healing in the Face of Tragedy 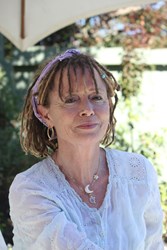 We at The Women’s Eye are honored to be a radio program and website for women to connect with one another and to be able to spread the word about so many amazing people.

In remembrance of the one year anniversary of the Sandy Hook Elementary School shootings in Newtown, CT, The Women’s Eye Radio Show (TWE) will air two special interviews at 3 PM MST on 1480KPHX in Phoenix on December 14th and 15th. Host Stacey Gualandi speaks with Scarlett Lewis, mother of 6-year-old Jesse, a Sandy Hook Elementary School shooting victim. Lewis is the author of "Nuturing Healing Love, A Mother’s Journey of Hope and Forgiveness" (Hay House Publishing), a book about her grief, her conscious decision to heal and forgive, and her commitment to cultivate nurturing, educational programs in schools that will teach children how to manage anger. Intertwining the spiritual connection between healing, well-being and happiness by choice, TWE will also speak with recent Oprah guest and nationally-acclaimed New York Times bestselling author, Anne Lamott. Deeply affected by the Sandy Hook Elementary School tragedy, Lamott will share her personal experiences in finding meaning in the face of violence, as documented in her new book "Stitches: A Handbook on Meaning, Hope and Repair" (Riverhead Books).

Scarlett Lewis’ book, named after her son Jesse’s last written words on a chalkboard at home, “Nurturing Healing Love” has received acclaim from readers and reviewers throughout the world. Discussing her life-changing decision to put Jesse’s words into action, Lewis states, “Jesse’s message was one of comfort for his family and friends, but I also knew that it was a message of inspiration for the world. I feel such a responsibility to spread that message, and that’s my purpose now. I feel very blessed to have it . . . I choose to forgive.” As the Founder of JesseLewisChooseLove.org, Lewis’ interview also focuses on her work to battle mental health issues. Partnering with school educators, Lewis is providing mindful curriculum in anger management, communication and nurturing skills, aimed at helping future generations in the fight against violence. “This whole tragedy started with an angry thought. I pictured Adam Lanza as a little boy with this one angry thought in his head, which is totally normal, except that Adam didn’t have the tools to deal with it. He decided to blame his parents, his teachers the students . . . he became a victim of his own blame, and I believe prolonged victimization leads to rage. . . . but a thought can be changed,” says Lewis.

Following TWE’s interview with Lewis, Gualandi speaks with author Anne Lamott regarding the inspiration for "Stitches". Stemming from her desire to explain the tragic events of Newtown, CT to her Sunday school class, "Stitches" tackles the calamity of the Sandy Hook shootings, which she considers to be more harrowing than 9/11. “I thought it was the end of the world . . . It was madness.” On sharing and supporting one another through the experience of loss and grief, Lamott says, “A lot of my book is about paying attention, forgiving yourself and finding out who you aren’t. There are so many different kinds of ways that we stitch and quilt and provide for one another . . . life is about taking care of each other. We have been stitched together our whole lives whether we know it or not.”

“Being on the show with Anne Lamott is my Christmas gift from Jesse,” said Lewis. “I read Stitches and I think it's an important book. I think people are looking for meaning and I hope they find it in both 'Stitches' and 'Nurturing, Healing Love'.”

Commenting on these timely interviews, TWE Producer Pamela Burke states, “Scarlett and Anne are incredibly inspiring women who were deeply and uniquely affected by the tragedy at Sandy Hook. We are thankful that through their reflections and words of wisdom, we can begin to understand how to deal with violence like this, and move forward with a spirit of compassion and cooperation. We at The Women’s Eye are honored to be a radio program and website for women to connect with one another and to be able to spread the word about so many amazing people.”

About The Women’s Eye:
Pamela Burke has been a Producer and/or Executive for NBC, LIFETIME Cable Network, USA Network, Gannett, King World and CBS, A&E Cable Network and DISCOVERY Planet Green. Industry insider Stacey Gualandi is currently a Reporter for KTNV, the ABC affiliate in Las Vegas. Her credits include Inside Edition, TV Guide Network, Hallmark Channel, and EXTRA. The Women's Eye website launched in 2010 to share the positive work of women throughout the globe.

Tune into the show in Phoenix on 1480KPHX AM or as it streams live on 1480KPHX.com on Saturdays and Sundays at 3 pm MST. For more information or to arrange an interview with Pamela Burke or Stacey Gualandi, contact The Women's Eye Radio Show at thewomenseye(at)gmail(dot)com or call Carrie Hill, Publicist at 757.621.9319.

The Women's Eye RadioTHE WOMEN’S EYE features all types of women who are in the news or who are making their own headlines as they follow their passions and interests to improve their lives and the lives of others.