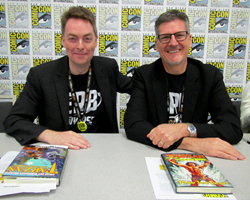 Each of the ERB Universe novels will be stand-alone and can be enjoyed on its own merits, a unique, ongoing storyline runs through the series.

“We have received a lot of feedback from the fans wishing to see an official stance on authorized ERB canon in new works being produced,” says Director of Publishing Christopher Paul Carey. “I’m here to say that we’ve been listening to you, and the Edgar Rice Burroughs Universe series is our answer. I couldn’t be more thrilled about the team of critically acclaimed authors we’ve got on board for the series, and it’s been one of the highlights of my career in publishing to work with them. I couldn’t be happier with their dedication to ensuring faithfulness to Mr. Burroughs’ original works as well as their enthusiasm for collaborating to create internal consistency between each other’s new novels.”

THE SUPER-ARC
Though each of the ERB Universe novels will be stand-alone and can be enjoyed on its own merits, a unique, ongoing storyline runs through the series: the “super-arc.” The multi-novel super-arc begins in Burroughs’ primeval, dinosaur-inhabited world of Pellucidar, as inventor Jason Gridley and his young protégé Victory Harben investigate a mysterious disruption in the Gridley Wave, the means by which Edgar Rice Burroughs—when he appeared as a character in his own stories—received so many of the fantastical narratives for his renowned tales of adventure:

The ERB Universe series beings when a mysterious force catapults inventors Jason Gridley and Victory Harben from their home in Pellucidar, separating them from each other and flinging them across space and time, they embark on a grand tour of strange, wondrous worlds. As their search for one another leads them to the realms of Amtor, Barsoom, and other worlds even more distant and outlandish, Jason and Victory will meet heroes and heroines of unparalleled courage and ability: Carson Napier, Tarzan, John Carter, and more. With the help of their intrepid allies, Jason and Victory will uncover a plot both insidious and unthinkable—one that threatens to tear apart the very fabric of the universe!

THE ERB UNIVERSE NOVELS
The Edgar Rice Burroughs Universe series launches in 2020 with "Carson of Venus: The Edge of All Worlds" by Matt Betts, to be followed by "Tarzan: Battle for Pellucidar" by Win Scott Eckert, "John Carter of Mars: Gods of the Forgotten" by Geary Gravel, and "Victory Harben: Fires of Halos" by Christopher Paul Carey. The super-arc will continue in subsequent novels yet to be announced. To learn more about the new series, visit ERBUniverse.com.

ABOUT EDGAR RICE BURROUGHS, INC.
From its Tarzana, California headquarters, Edgar Rice Burroughs, Inc. administers the intellectual property of American author Edgar Rice Burroughs (1875–1950), one of the twentieth century’s most prolific and enduring writers. Mr. Burroughs’ 80+ novels and 40+ short stories have been adapted into 61 feature films and 249 television episodes, and are featured in comic books, video games, apparel, and other merchandise. Through worldwide ownership of copyrights and trademarks, Edgar Rice Burroughs, Inc. has overseen every adaptation of his literary works in film, television, radio publishing, and theatrical stage productions. The company, which licenses the copyrights and trademarks of Mr. Burroughs’ fictional heroes, including Tarzan of the Apes®, John Carter of Mars®, Carson Napier of Venus™, and many more, is owned by his heirs and operates from offices the author built in 1927 on the site of his former Tarzana ranch in the San Fernando Valley.