Recent release “Green Dots” from Page Publishing author Anthony Marcello is a book filled with murder, greed, and mystery and a detective named Jack Webster whose job it is to piece it all together. 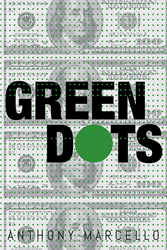 Anthony Marcello, a devoted son who spent most of his adult life in prison, has completed his new book “Green Dots”: a riveting tale where the questions keep coming and readers don’t know where the clues will take them next.

According to Marcello, “Before (I) realized that (I) had the great ability to write, (I) had a life of drugs and became a street hustler in order to support (my) habit. (I) was raised by a loving mother who had always encouraged (me) from a young age. She told (me) that (I) could do anything that (I) put (my) mind to. After graduating from high school (I) successfully enrolled and entered Jackson State University and became a member of the Sonic Boom. Unfortunately, it was during this time that (I) was introduced to drugs. (I) left Mississippi and went to Memphis, Tennessee. (I) began to steal and street hustle to support (my) habits, landing (me) behind bars for several years. (I) spent most of (my) adult life in jail in Memphis, Tennessee and Jackson, Mississippi. Because (my) mom never gave up on (me), even while (I) was incarcerated, and continued to encourage (me) to get (my) life together, (I) felt that the only way to make it up to her was to use (my) talent for writing in the hopes of being able to provide for her.”

Published by New York City-based Page Publishing, Anthony Marcello’s suspenseful work explores the tragedy of a murdered family and how everything is not as it appears.

It’s a brother’s worst fear, his worst nightmare, when Amos Johnson pulls up to his brother’s house to pick him up for work, the house is dark and the door is open. His brother and the kids are dead. His brother’s wife is gone, and so is her car. The great detective, Jack Webster is called in to solve the case. Amos becomes the number one suspect. A notebook is found worth over one million dollars. The case goes on and more bodies are starting to turn up. The nightmare continues.

Readers who wish to experience this intriguing work can purchase “Green Dots” at bookstores everywhere, or online at the Apple iTunes store, Amazon, Google Play or Barnes and Noble.
For additional information or media inquiries, contact Page Publishing at 866-315-2708.