The world's largest annual fly-in convention runs July 22-28 in Oshkosh, Wisconsin, and features more than 10,000 airplanes and 500,000 people from more than 80 nations. There are nine air shows in seven days, plus activities that span the spectrum of aviation and aerospace. 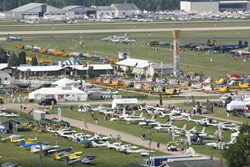 Aircraft ranging from the smallest ultralight to massive airliners and military transports are part of EAA AirVenture Oshkosh each year.

EAA AirVenture has always honored the past while looking toward the future of aviation. This year’s event, featuring a historic NASA mission, military fighter jets, and innovative autonomous vehicles, will only build on that timeless theme.

Wittman Regional Airport will soon be busiest airport in the world – for one week. The 67th annual Experimental Aircraft Association fly-in convention, scheduled for July 22-28, will welcome more than 10,000 aircraft and a half a million flight enthusiasts to Oshkosh, Wisconsin this summer. This year is also notable as it marks the 50th consecutive year that Oshkosh has hosted the EAA fly-in, making the city synonymous with sport aviation around the world.

This year’s event will commemorate the 50th Anniversary of the Apollo 11 mission. Along with featured guest command module pilot Michael Collins, EAA AirVenture Oshkosh 2019 will welcome Apollo astronaut Joe Engle during the evening program at Theater in the Woods on Friday, July 26. This historic mission in July 1969 marked the first successful moon landing and safe return.

“EAA AirVenture has always honored the past while looking toward the future of aviation,” said Dick Knapinski, EAA’s director of communications. “This year’s event, featuring a historic NASA mission, military fighter jets, and innovative autonomous vehicles, will only build on that timeless theme.”

The 50th anniversary of the Boeing 747, the iconic wide-body jetliner that has carried everything from heads of state to the space shuttle, will also be celebrated at Oshkosh. Various Boeing 747s will make an appearance at AirVenture during the week, with fly-bys and displays on the ground’s featured Boeing Plaza. This event will extend a legacy of the airplane’s appearances at Oshkosh that include jumbo jets from as far away as Australia, New Zealand, and Iceland in past years.

A roster of the most legendary American military aircraft in history, from iconic World War II airplanes to today’s most sophisticated flying machines, will be flying and on display this summer. In conjunction with the U.S. Air Force Air Combat Command, the EAA Warbirds of America, and individual aircraft owners, a variety of aircraft, including the F-15, XP-82 Twin Mustang, F4U Corsairs, C-47, and A-10 attack aircraft, will be featured at EAA AirVenture 2019.

For the 12th straight year, EAA WomenVenture returns to foster camaraderie for women in aviation. In addition to social and speaker events throughout the week, the WomenVenture Power Lunch on Wednesday, July 24 will feature U.S. Air Force Col. Kim Campbell, a decorated A-10 combat pilot who earned a Distinguished Flying Cross after flying an A-10 damaged by anti-aircraft fire during aerial combat over Iraq.

AirVenture also includes learning centers for children and aircraft enthusiasts; aircraft of nearly every size, shape and era to view (including more than 300 warbirds, homebuilts and vintage craft); nightly activities, like a “fly-in” theater and concerts; and flight experiences on a B-17, Ford Tri-Motor and Bell 47 Helicopter. The EAA Aviation Museum is also open for tours during the week of AirVenture.