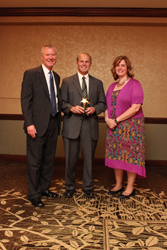 “When the time came for the members of the State Bar to step up to the plate, they came through, not only financially, but also with their time and talent,” says Herrling Clark Law Firm President Kevin Lonergan.

Herrling Clark Law Firm, Ltd. is proud to announce that President Kevin Lonergan was recently honored with the State Bar of Wisconsin’s 2015 Gordon Sinykin Award of Excellence. Lonergan received this award for his contribution on the 2014 National Mock Trial Committee.

This elite award is in recognition of the committee members’ time and effort spent on bringing the National Mock Trial Tournament to Wisconsin in 2014, and for putting on a tremendous event for competing Mock Trial teams from across the U.S. and the world. The National Mock Trial participants represented 43 states, plus Guam, the Northern Mariana Islands, and South Korea.

Lonergan’s committee worked on the event for nearly two years. The committee’s efforts inspired more than 200 State Bar of Wisconsin members to donate funds totaling more than $160,000. They also donated their time as volunteer judges and general championship volunteers during the two-day event.

“When the time came for the members of the State Bar to step up to the plate, they came through, not only financially, but also with their time and talent,” says National Mock Trial Executive Committee Chair and Herrling Clark Law Firm President Kevin Lonergan. “My colleagues have rallied around this event and have shown the rest of the membership that mock trial is by far the State Bar's number one public outreach program.”

Lonergan has been part of mock trial for more than 14 years, serving in various capacities, but most notably as an attorney-coach for the Xavier High School mock trial team in Appleton, Wisconsin.

Lonergan’s professional success within the personal injury arena has been recognized by numerous respected legal organizations. For the past 10 years straight, he has been named a Wisconsin Super Lawyer, which places him among the top five percent of attorneys in the state. In 2014, Lonergan was named the State of Wisconsin’s “Trial Lawyer of the Year” by the Wisconsin Association for Justice. He is a “Top Rated Personal Injury Lawyer” in the Fox Cities area by Avvo, and he has been rated one of the top trial lawyers nationally.

The experienced Appleton personal injury lawyers have accessibility to the most recent developments in the law and are equipped to execute appropriate legal strategies to obtain the best possible results for their clients. Call (920) 739-7366 to schedule an initial consultation or fill out the online contact form today.