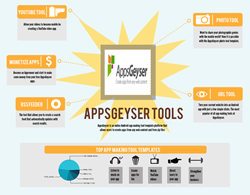 AppsGeyser strives to provide all the tools required to allow app makers to create successful apps.

The Android app tool templates that are currently available for app creation on the AppsGeyser website include; the newly released e-book app template, that allows an app maker to create an offline app from almost any format, video based apps, such as the YouTube and TV app templates, and the audio template. AppsGeyser also offers the more traditional app making templates, including; the URL template, HTML editor template for apps from scratch and the zip file template for the more advanced app makers. The AppsGeyser blog has detailed explanations of each of these app template styles to allow the app maker to create an app with ease.

"I thought that all my dreams had come true the day that I discovered AppsGeyser," Jane Brown explained. “I am a teacher and wanted to bring some fun to my lessons, I have created a range of apps that conveys my lessons in using different methods, the kids love it.”

“AppsGeyser listens to their app makers and strives to provide all the tools required to allow them to create successful apps. AppsGeyser Co-founder Vasily Salomatov, explained, “With now over 14 Android app templates on the market, the scope for app development has been increased.”