Drink-O-Tron by Prodigal Creative LLC takes the best aspects of various drinking games, and combines them with the advanced technology and “anytime, anywhere” convenience of the modern app world. The new no-cost app is available from the App Store and Google Play. 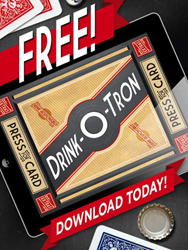 Worldwide fans of Prodigal Creative LLC’s insanely fun, creative and unique drinking game app Drink-O-Tron can re-fill their glasses for two cheerful reasons: the launch of new game decks, and for the first time ever Android users can join the never-ending
Drink-O-Tron party.

With over 200k downloads and hundreds of positive reviews, Drink-O-Tron is the App Store’s #1 drinking game -- and within seconds of launching the app, it’s easy to see why it’s universally hailed as “The Drinking Game of Drinking Games”.

Essentially, Drink-O-Tron takes the best aspects of various drinking games – a glorious legacy of social inebriation that dates back to 500 BCE -- and combines them with the advanced technology and “anytime, anywhere” convenience of the modern app world.

Here’s how it works:
Users start by selecting a deck that fits their mood, such as Wager, Drunkard, Tipsy, Flirty, Mischief, Rulemaster, Pants on Fire, Accents, Categories, Survival, Never/Ever,Truth or Dare, and several more. They can also mix different decks, or load all decks for
an ultimate experience that falls somewhere between blissful and bizarre. Two decks are included with the initial download (Basic and Wager), while additional decks are available as in-app purchases.

Once they load their deck(s), users simply tap their screen, flip over a card, and follow the instructions. For example, they may be told to state a fact about themselves and have others guess whether it’s true or false. Those who guess wrong have to take a drink. Or, they may be ordered to take a drink for every tattoo on their body, and so on. Each card is unique, and many of them are laugh-out-loud funny.

What’s more, that the decks and cards are stunningly illustrated works of art, and have a very cool vintage “throwback” look and feel. The audio and sound effects are also exceptional, but can be muted for those playing in environments where commanding unwanted attention is not particularly good strategy (i.e. on flights, trains, etc.).

“The back story for Drink-O-Tron is as unique as the app itself,” commented Travis Blain of Prodigal Creative LLC. “Some friends and I had rented a house in the mountains. When we got there, we realized to our horror that nobody brought playing cards for drinking games. We figured we’d be able to find something in the App Store – but we figured wrong, because we came up empty. And so that night we got together and invented Drink-O-Tron, which has now become the drinking game of drinking games!”

The new and improved version of Drink-O-Tron is available from the App Store at https://itunes.apple.com/app/drink-o-tron-drinking-game/id862356897, and from Google Play at https://play.google.com/store/apps/details?id=com.drink_o_tron.

For all other information or media inquiries, contact Mark Johnson on behalf of Prodigal Creative LLC at +1 408 757 0156 or press (at)appshout(dot)com.