Music Jack from Some Anonymous People lets users select songs from their device’s library, which then become the soundtrack to a fun, challenging and incredibly addictive time-based scrolling game. The unique, feature-filled app is available now for iOS devices from the App Store, and for Android devices from Google Play. 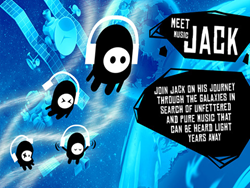 Music Jack is totally original, and is a unique blend of excitement and fun.

People who enjoy listening to their favorite music and playing exciting games on their mobile device can now get the best of both worlds by downloading the unique and fun new app https://itunes.apple.com/app/music-jack-lite/id926195659.

Created by Some Anonymous People, Music Jack lets users select songs from their device’s library, which then become the soundtrack to an exciting, challenging and incredibly addictive time-based scrolling game. A longer song means a lengthier level, and the game’s speed is directly linked to the type of music. For example, songs with a fast dance beat speed up the game, while songs with a more relaxed vibe slow down the game.

Regardless of whether they’re playing a fast or slow game, users must rely on sharp, finely-tuned reflexes to score points and collect “Musical Elements,” which activate power-ups and score multipliers.

Plus, to add another layer of excitement, users must steer clear of the “Dark Music,” which is constantly hunting them down. They must also avoid various obstacles –including asteroids – that, upon impact, reduce both the scoring multiplier and speed, and allow the Dark Music to catch up faster. Fortunately, users who do a good job of collecting the above-noted Musical Elements can use them to keep the Dark Music at a distance.

Other Music Jack special features include:

“So many mobile games these days are boring and are basically just low quality duplicates of something that was popular months or years ago,” commented a spokesperson from Some Anonymous People. “And that’s why we spent so much time creating Music Jack. It’s totally original, and is a unique blend of excitement and fun. Users will love listening to their favorite music as they put their reflexes to the test, grab Musical Elements, avoid obstacles and of course, stay away from the dreaded Dark Music!”

Music Jack, the unique and fun new game that lets users integrate their own music, is available for iOS devices from the App Store at https://itunes.apple.com/app/musicjack-lite/id926195659, and for Android devices from Google Play at
https://play.google.com/store/apps/details?id=com.GutShotEntertainment.MusicJunkie.

For all other information or media inquiries, contact Mark Johnson on behalf of Some Anonymous People at +1 408 757 0156 or press (at)appshout(dot)com.

About Some Anonymous People
Just like any other superhero, we must maintain our mysterious identities too. We are Some Anonymous People entertaining the world one game at a time. Our boredom is our enemy. We are gaming nerds who create apps for people like us. Our games are addictive, engaging and awesome! Just like we are ;)