New York’s spectacular April Fools’ Day Parade kicks into its fourth decade of hilarious irreverence, poking fun at the past year’s public displays of hype, hypocrisy, deceit, bigotry, and downright foolishness. In honor of this 30th anniversary, 30 lucky revelers, picked at random from the crowd at the end of the parade in Washington Square Park, will receive free cartoon interpretations of their favorite taboo religious icons. 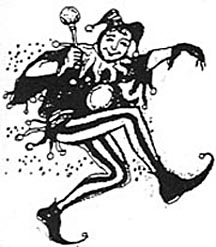 Says parade organizer Joey Skaggs, "Our biggest challenge is dealing with the length of the parade, because there's never a lack of eligible fools."

The 30th Annual April Fools’ Day Parade will begin at Fifth Avenue and 59th Street at 12 noon, Wednesday, April 1, 2015. Rain or shine, the parade will march down Fifth Avenue to Washington Square Park for the climactic selection of the King of Fools from the costumed marching look-alikes.

The theme for this year’s parade is “Hands Up, Don’t Shoot.” The Grand Marshall will be Mayor Bill de Blasio wearing an “I Can’t Breathe” T-shirt. He will lead the NYPD Marching Band playing Smokey Robinson’s “You Really Got a Hold on Me”, however, they will be marching backwards in a continuing show of disrespect for the Mayor. Special guests will include Ebola-infected volunteers recently returned from West Africa who have ignored their quarantines. Color commentary will be provided by NBC’s Brian Williams making it up as it happens.

The first float will be a Mobile Carnival Shooting Gallery where police officers are firing at young minority targets. Then comes a Three-Story Glass Elevator float featuring President Obama on the 3rd floor with armed civilians; Beyoncé’s sister Solange ferociously assaulting Jay-Z on the 2nd floor; and NFL star Ray Rice dragging out his unconscious fiancée on the ground floor. Next are 2016 Presidential Hopeful Clowns riding in a hot-air balloon inflated by their own boasts and flatulence. They will be tethered to a voracious media circus. This will be followed by the Sarah Palin Bar Brawl float, packed with family members slugging it out with bar patrons. Next are several cattle trucks filled with the first wave of 11 million illegal immigrants en route to deportation, followed by a brigade of Russian soldiers en route to the Lower East Side’s Ukrainian neighborhood in order to annex it. Bringing up the rear will be an International Search and Rescue float looking for missing Malaysian flight 370. All floats will be powered by recalled GM vehicles. Parade organizers are not responsible for any injuries or deaths.

Says parade organizer Joey Skaggs, "Our biggest challenge is dealing with the length of the parade, because there's never a lack of eligible fools."

As the parade enters Washington Square Park, the festivities will begin. Food concessions will offer antibiotic saturated BBQ chicken, a Monsanto sponsored GMO vs. Non-GMO taste test; and a Carl Rove rectal feeding booth. Bill Cosby will sponsor an open bar, for women only. There will be an NYPD choke-hold demonstration, followed by a New England Patriots’ punting contest with deflated footballs. There will also be a booth for expelled Nazis to pick up their Social Security checks and a Play-doh booth sponsored by Hasbro will give away free penis-shaped icing extruders for their Cake Mountain toys. Spectators can enter the Peep-a-Boob booth to see hacked photos of naked celebrities or visit the Prince Andrew Under-Age Dating booth. Cartoonists from Charlie Hebdo will offer satirical portraits of revelers as their favorite taboo religious icons (30 lucky spectators will get theirs free). The Texas Abortion Clinic booth will be closed.

The parade is once again sponsored by the billionaire Koch Brothers, joined this year by high school senior Mohammed Islam who proclaimed to New York magazine that he made $72 million in the stock market during his lunch breaks. Parade security will be provided by ISIS. Last year’s King of Fools, Vladimir Putin, will be on hand to crown this year’s King of Fools, who will be chosen based on the loudest cheers at Washington Square Park. The winner will reign through March 31, 2016.

The New York April Fools' Committee created the April Fools’ Day Parade in 1986 to remedy a glaring omission in New York’s ethnic and holiday parades. These events fail to recognize the importance of April 1st, the day designated to commemorate the folly of mankind. In an attempt to bridge this gap and bring people back in touch with their inherent foolishness, the parade annually crowns a King of Fools from parading look-alikes.

The public is encouraged to participate, in or out of costume, with or without floats, and may join the procession at any point along the parade route. Floats can be no wider than 10’ and no longer than 30’. They can be self-propelled, towed, pushed or pulled. Customized bicycles, tricycles, baby carriages and aerial balloons are welcome. All participants are costumed look-alikes, and the Parade Committee assumes no liability for damages caused by satire. Parade floats and marchers must be at 59th Street and Fifth Ave no later than 11:30 a.m..