Aquatic Collective releases "Standing With The Waters": A Benefit Album For Standing Rock 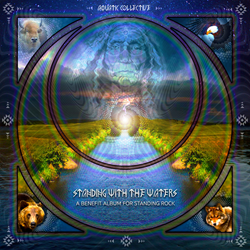 "Standing Rock has become a uniting cause to encourage living in a world where people come before profits. The benefit includes original songs in reverence of protecting our water and unifying as a human Tribe." - Aquatic Collective

Unifying with powerful intentions, Aquatic Collective has brought together a group of talented artists that created a message to spread awareness and share a meaningful message in support of the Standing Rock Movement.

This album was created in response to the ongoing controversial Dakota Access Pipeline Project being built by Energy Transfer Corporation. It is an approximate 1,172-mile, 30-inch diameter pipeline that will connect the rapidly expanding Bakken and Three Forks production areas in North Dakota to Patoka, Illinois. As a result, the Standing Rock Sioux Tribe filed a complaint in federal court, stating that the pipeline construction "threatens the Tribe's environmental and economic well-being, and would damage and destroy sites of great historic, religious, and cultural significance to the Tribe.”

The album’s cover art and introductory song feature words from Chief Black Fox of the Dakota Sioux by Sacred Sound. The cover art was created by Andrew Bunyan (a.k.a. Sacred Sound) as a visual prayer for Standing Rock, invoking the spirit of certain archetypes, symbols, and imagery associated with Native American mythology. “We are in solidarity with protecting freshwater ecosystems and the health of our natural places for future generations. We honor Native voices and everyone’s right to clean water. We continue to pray for care of water, land, and all peoples. Standing Rock has become a uniting cause to protect water for our ecosystems, for future generations, and to encourage living in a world where people come before profits. The benefit includes original songs in reverence of protecting our water and unifying as a human Tribe," states the Aquatic Collective.

The “Standing With the Waters” album is available on Bandcamp.

Dissølv founder Valentin Santana, who has collaborated with Keyframe-Entertainment on various projects throughout the years, is also announcing the new direction of his project, which now includes brother and co-producer Andre Reinero and visionary performance artist Jasmine Semjase.

Andre Reinero has immersed himself in the world of music since he was five years old, making him the accomplished musician and diverse artist he is today. From playing piano and baritone sax in orchestras and jazz bands to busting out psychedelic bass and melodic vocals as a singer songwriter, Andre has known nothing but music his whole life. He now holds a degree in audio production and mixing mastering and will continue to surf the sonic journey wherever the music takes him.

Jasmine Semjase is a visionary performance artist who blends intentional movement with vibrational self expression. Channeling her background in dance, yoga, and the healing arts, she infuses various dance styles with ceremonial ritual performance in devotion to spiritual healing through celebratory release. With music as her muse, Jasmine's intentions are to inspire an awakening of consciousness through the alchemy of flowetry and reconnecting our celestial essence to our sacred roots as divine creatures on this planet.

San Francisco-based Dissølv is a live sonic journey through the primal and sacred ritual of dance; seeded with Sacred Tuning Systems & Nature Soundscapes, and Conceived with Deep Bass & Tribal Drum.

Keyframe-Entertainment also released the Temple Bass Dissølv and Mixwell remix of IAMEVE’s “Starman,” whose video features two soulmates being reunited in a multi-dimensional plane of existence. Mixwell is a Montreal-born producer and songwriter, based in Guatemala. Although deeply rooted in soul and hip hop, Mixwell's productions span across many genres, and through the passion for Afro-Latin music he developed through his travels, he incorporates the sounds of Belize, Colombia, Brazil and others into Bass-driven Electronica. The Dissølv and Mixwell “Starman” remix is available on Amazon and iTunes.

About Dissølv:
Dissølv is a live sonic journey through the primal and sacred ritual of dance; seeded with Sacred Tuning Systems & Nature Soundscapes, and Conceived with Deep Bass & Tribal Drum. In 2016, Dissølv evolved to include founder Valentin Santana’s brother and co-producer Andre Reinero and visionary performance artist Jasmine Semjase. Dissølv is committed to bringing conscious, authentic vibrations to stimulate and awaken listeners on every level.

About Keyframe-Entertainment:
Keyframe-Entertainment is a specialized branding and strategy firm, which produces, supports, and distributes cutting-edge projects. Keyframe is the Executive Producer of “ReInhabiting the Village,” “The Bloom Series” Episode 3, and “Electronic Awakening,” and the Associate Producer of The Polish Ambassador’s Permaculture Action Tour film. Keyframe also offers marketing support and strategic networking to DJs, producers, companies, filmmakers, nonprofits, and festivals.