Archangel from the Winter’s End Chronicles is a steampunk adventure film, which began life as an on-line web series. However, the goal of this ambitious crowd-funding campaign on Indiegogo is to take Archangel to the next level, a full-length feature film. 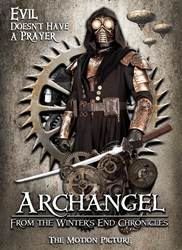 The project began life as a small web series, but has created quite a fan base within the steampunk and science fiction communities.

The film takes place in a dark, steampunk, Victorian world of 1893 London, where a masked vigilante leads an underground resistance in an ongoing fight against a tyrannical regime, who had their sights on world domination. “The project began life as a small web series, but has created quite a fan base within the steampunk and science fiction communities,” said Di Pietro.

The direction of the project is to produce a 90-minute feature film, which will act as both a stand-alone motion picture and also a pilot for a possible television series. Reel Cool Entertainment feels that the timing seems perfect, since Steampunk design now even extends throughout the world into the areas of fashion, engineering, music, and for some, a lifestyle.

Di Pietro adds, “The film will be shot in and around the Atlanta, Georgia area, which has become quite the mecca for motion picture and television production over the past five years.” People and parties interested in funding or working on this ground-breaking project should check out the links to both the Indiegogo campaign and the official Facebook page, below.

The time is now for Archangel from the Winter’s End Chronicles, a film and series that will truly deliver this unique science fiction world in a vein that is new, fresh and unusual.

As one of the newest independent film companies in the Atlanta, Georgia marketplace, Reel Cool Entertainment wants to hit the ground running with a series of cutting edge shorts, films and television projects.

Dave had worked for Paramount Pictures for over 13 years and has directed TV commercials, Indie Films, Web Series and even Stage Productions. Originally from the Philadelphia, Pennsylvania area, he made the move to the Atlanta, Georgia area in 2003. Besides writing and directing, he loves collecting memorabilia and film props from the Star Wars and James Bond series of films.

Indiegogo is a way for people all over the world to join forces to make ideas happen. Since 2008, millions of contributors have empowered hundreds of thousands of inventors, musicians, do-gooders, filmmakers—and other game-changers—to bring big dreams to life.

Archangel from the Winter's End Chronicles Teaser PosterA teaser poster for the new steampunk action film set in London of 1893.

Archangel Stands at the ReadyArchangel, the steampunk vigilante, stands to protect 1893 London.

Archangel's LaboatoryThe underground steampunk laboratory of Archangel and the Resistance.

Archangel's LaboratoryThe underground laboratory of Archangel and the Resistance.