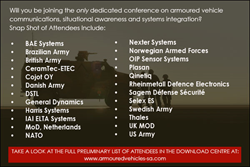 "I urge you to join us in March 2016, alongside an array of likeminded individuals to ensure that you too can benefit from this unique forum." - Major General (Ret) Vasileios Raptis, Hellenic Army, NATO SHAPE

Some of the most senior military and industry representatives are set to gather next month at SMi’s conference on Future Armoured Vehicles Situational Awareness taking place on 16th and 17th March in Central London.

Other event highlights at the only dedicated conference on armoured vehicle communications, situational awareness and systems integration will include:

Further information is available at http://www.armouredvehicles-sa.com

Established since 1993, the SMi Group is a global event-production company that specializes in Business-to-Business Conferences, Workshops, Masterclasses and online Communities. We create and deliver events in the Defence, Security, Energy, Utilities, Finance and Pharmaceutical industries. We pride ourselves on having access to the world's most forward thinking opinion leaders and visionaries, allowing us to bring our communities together to Learn, Engage, Share and Network. More information can be found at http://www.smi-online.co.uk