Saying goodbye to a loved one is one of the most difficult things a person will ever do. Minister Kevin Cain shares advice from a personal and biblical perspective on life, death, and moving on. 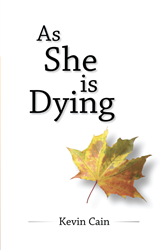 “Because in this world there is both good and bad among us; blackberry picking always results in blood before the bushelful of fruit returns. While scars may remain, all bleeding stops eventually.”

As She Is Dying discusses the importance of a eulogy during funerals and burials—most especially for the loved ones of the deceased. The author relates his background and experience as a minister of local churches in his hometown of Appalachia. Then, throughout the book, he shares lessons and advice on how to be a compassionate and empathic funeral officiant, which he learned from his mother, grandmother, and other people around him—both the living and those who have passed on.

The book begins with explanations of what a eulogy is and how important it is during a funeral. It gives solace to the living, especially when the officiant says the name of the deceased and is honest about whether he knew them or not. He also defines the most basic purpose of a eulogy, quoting his mother: “When someone is crying, remembering and laughing won’t make it go completely away, but it will help. These are two of our greatest gifts: tears and laughter.”

After sharing some of what he knows about creating eulogies, the author discusses life and death, lessons on which he learned during his youth up until the present. He talks about some of the many challenges people face upon the event of a death of a loved one, such as readjusting to daily life after the burial and the suffering parents undergo for the rest of their lives if they lose their own children. He also provides enlightening insights, such as how we are defined by the people we have lost and that learning about death at a young age—while difficult—teaches young people how to accept their own mortality.

Alongside Kevin’s anecdotes and pieces of wisdom are many biblical passages which also teach about death, grief, and hope. These references only show that while times continue to change for us, the ways we can view these three aspects of life are universal. He includes words that readers can use to comfort people around them who are grieving, leaving a reminder, “While scars may remain, all bleeding stops eventually.”

Kevin Cain comes from a West Virginian family of spiritual people, a notable member of which is his great-grandfather, a circuit-riding preacher. A minister himself since his late twenties, he officiates between thirty-five to fifty funerals a year. Now in his late forties, he has officiated funerals numbering almost a thousand, many of which for individuals he wasn’t acquainted with or families with no religious affiliations.