The tragic events of 9/11 left their mark on the entire nation, but for parents of 11-year-old Asia Cottom, the loss was personal; their daughter died on flight 77, which crashed into the Pentagon. The Cottoms have founded the Asia SiVon Cottom Memorial Scholarship Fund and are now writing Asia's New Wings: The Untold Story of a Young Girl Lost on 9/11. 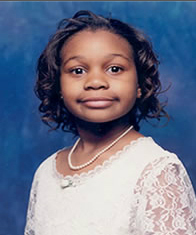 Asia was bright, beautiful and articulate. Well beyond her years. She loved her family, her life and God.

When Flight 77 crashed into the Pentagon on September 11, 2001 after being hijacked, the world saw the outpouring of grief and support across America. However, for one family, the grief was intensely personal. Asia Cottom, 11, was one of three DC Public School students on the airplane when Flight 77 crashed that morning. The plan was for her to take part in one of America's premier undersea projects—the Sustainable Seas Expedition. She had been chosen to go on a four-day National Geographic field trip to the Channel Islands National Marine Sanctuary in Santa Barbara, California.

Dealing with the loss of their daughter was indescribable for Clifton and Michelle Cottom, but in the days and weeks following 9/11 they were amazed by the outpouring of support, even from complete strangers, in the form of cards, letters and money. They began to wonder what to do with the funds, and finally decided to honor their daughter's memory in a way that highlighted her academic achievements: by establishing a scholarship in her memory. The Asia SiVon Cottom Memorial Scholarship Fund or ASC, has been awarded to many recipients throughout the years; in fact, the very first recipient received her Juris Doctorate and is very successful.

While the Cottoms were pleased to be able to help those who need assistance in attaining a college education, they wanted to share more of Asia's story. The couple decided to write a book, and 'Asia’s New Wings: The Untold Story of a Young Girl Lost on 9/11' is scheduled to be published by Next Century Publishing on September 11, 2014.

The Cottoms hope to honor Asia, share her story and show the world that children were also victims on that tragic day. In light of the continuing strife throughout the world, the Cottoms hope that Asia's story will resonate in the hearts and minds of everyone who reads it and that her legacy of love and hope will continue for generations to come.

About the Cottoms:
Clifton and Michelle Cottom hope to share the story of their daughter, Asia, who at 11 years old was a tragic victim of the 9/11 terror attacks. Their new book highlights the beauty of their daughter's life as well as the legacy that continues through the scholarship named after her.