At the End of Your Life, Will You Remember What You Did for Yourself or for Someone Else?

Xulon Press presents a devotional focused on living for others. 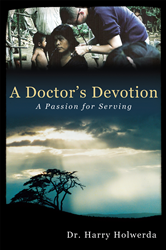 The opportunities, adventures and the delightful satisfaction of serving diverse peoples in need in many different situations and cultures [inspired me].

Holwerda began his career during the tumultuous ‘60s, volunteering to care for military personnel in Washington, D.C. during the Vietnam War. His servant’s heart later took him to the jungles of Ecuador as a missionary and into his private medical practice.

“The opportunities, adventures and the delightful satisfaction of serving diverse peoples in need in many different situations and cultures [inspired me]. If I could, I would do it all over again,” said Holwerda.

Dr. Harry Holwerda is a graduate of the University of Michigan Medical School, served in the Air Force during the Vietnam War, and was in private practice for 35 years. He served Christian Reformed World Missions as a medical doctor in full-time mission at the beginning of his career and since retirement. He and his wife Joan raised four children and live in Grand Rapids, Michigan.

Xulon Press, a division of Salem Media Group, is the world’s largest Christian self-publisher, with more than 15,000 titles published to date. A Doctor’s Devotion is available online through xulonpress.com/bookstore, amazon.com, and barnesandnoble.com.