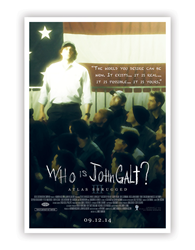 We fully expect people to draw a connection between the political implications in Atlas to the midterm elections...

Atlas Distribution Company announced today it has set September 12, 2014 as the USA theatrical release date for “Atlas Shrugged: Who is John Galt?”

According to Bill Lewis, ADC’s General Sales Manager, “We’re considering several scenarios including a platform theatrical release in those parts of the country where the prior films received a lot of support.”

The film is an adaptation of Ayn Rand’s 1957 novel, “Atlas Shrugged” and the story takes place “the day after tomorrow.” While nearly all of society’s most productive have mysteriously disappeared, the government continues to drive the economy to collapse by regulating and imposing its brutality on the country’s few remaining entrepreneurs. The film was directed by James Manera, produced by Harmon Kaslow and John Aglialoro, and stars Kris Polaha as John Galt and Laura Regan as Dagny Taggart. The film also includes Rob Morrow, Joaquim de Almeida and Greg Germann.

“We fully expect people to draw a connection between the political implications in Atlas to the midterm elections and use the film as an opportunity to show their support for Atlas’ message of freedom and the rights of the individual,” according to Aglialoro.

“People who have read Atlas will also very much appreciate the significance of a September release date,” added Kaslow.

Ayn Rand began writing “Atlas Shrugged” on September 2nd, 1946. The day has since become known as “Atlas Shrugged Day” around the world. Ayn Rand used the date specifically to mark many significant events in the novel including the nationalization of one of the largest corporations in the book, d’Anconia Copper.

The novel is structured in three parts. The prior two parts of “Atlas Shrugged” are currently available on DVD & Blu-ray, iTunes, or streaming on Netflix and Amazon.