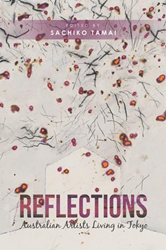 Sachiko Tamai offers a collection that documents the contemporary artistic exchanges between Australia and Japan through the voices of those involved, including artists and curators in her new book, “Reflections: Australian Artists Living in Tokyo” (published by Balboa Press AU).

Focusing on how Australian art and artists penetrated the Japanese art market in 1980s, the book aims to stimulate awareness of the importance of people to people respecting history. Documenting an aspect of Australian art history from the 1970s to 2000s, the book also seeks to illuminate the nature of Tokyo as an international art city in those years. Tamai presents a collection of essays and interviews of Australian artists who experienced living in Tokyo as practicing artists as well as the voices of the artists who responded to a questionnaire; some have written extensive accounts reflecting on their experiences.

“I hope readers will be able to enjoy such stories which are related to the contemporary art scene in Australia,” Tamai says, adding. “I hope this book will enable readers to reflect on past times with an easy and comfortable feeling and return to contemporary society with some new discoveries. I hope that in the future academic research will follow up with analysis of the time illustrated in this book and the artists who were a part of that era.”

“Reflections” is available for purchase at: https://www.amazon.com/Reflections-Australian-Artists-Living-Tokyo/dp/1504317572.

About the Author
Sachiko Tamai was born in Tokyo. She has worked as an announcer and translator for the Japanese Section of Radio Australia in Melbourne and has freelanced for the Australian Tourist Commission and Australian Meat Board, among others. She was previously the senior cultural officer of the Australian Embassy, Tokyo. Now retired, she serves as a volunteer art coordinator. She was awarded an Order of Australia Medal in 1999 for developing cultural links between Australia and Japan. Tamai is also the co-author of the “Structure of Theatre Culture” (2002 Keiso Shobo) in Japanese.