Recent release “Legal Murder” from Page Publishing author David McQuade is the spellbinding true story of the Allen family, a large, influential clan based in Hillsville, Virginia, who unknowingly ran afoul of powerful and corrupt local officials with nefarious motives. Written for the stage, this evocative play is a fascinating glimpse at dramatic events in his family’s past. 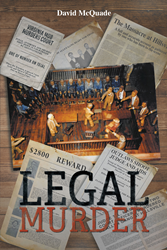 David McQuade, a West Virginia native who joined the Marine Corps at the age of seventeen and subsequently pursued a variety of careers before finding his calling and joining a film crew, later moving to Hollywood and working on an award-winning documentary about the uranium mining industry, has completed his new book “Legal Murder”: a compelling true story of family, greed, and Virginia town.

David writes, “’Legal Murder’ is the true story of the courtroom shoot-out that occurred in Hillsville, Virginia, in 1911. The events leading to the shooting and its tragic aftermath involve a large, well-positioned family and corrupt government officials who coveted their land. The true story is as strange, complicated, and exciting as any novel could be.”

Published by New York City-based Page Publishing, David McQuade’s engrossing book is an enthralling dramatic play based on members of the author’s family in the early twentieth century.

Readers who wish to experience this engaging work can purchase“Legal Murder” at bookstores everywhere, or online at the Apple iTunes store, Amazon, Google Play, or Barnes and Noble.