Author David Thomas Stone’s new book “Legend of the Jerawoc: Predator of Man” follows the journey of a young adventurer who dreams of finding lost cities

Recent release “Legend of the Jerawoc: Predator of Man” from Page Publishing author David Thomas Stone is a captivating novel that introduces John Sullivan Brooks, who is eager to find Mayan temples and old civilization. 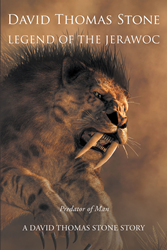 David Thomas Stone, a retiree with a unique, eclectic background, has completed his new book “Legend of the Jerawoc: Predator of Man”: a gripping and potent work that follows John Sullivan Brooks on an unforgettable adventure.

At first Brooks, just out of school, bought into the many ancient stories and ideas, and he had plenty of people willing to sell their secrets, maps, and directions to this eager young man. All he ever found were old myths, other people’s dreams, and rocks, lots of rocks, so he gave up on those ideas.

Twenty years later, still working deep in the Brazilian jungle, Brooks accidentally stumbled on a secret legend hidden for thousands of years: An ancient people of the Great Blue Ice Wall, and their secrets, still alive, living deep in their hidden city in the Amazon. They had started their travel here from the frozen north twelve thousand years before. These are their stories as they remember them. They migrated here over time from a cold, harsh land covered with glaciers.

This legend was real, and this changed everything. Brook’s challenge now was to protect these ancient people, their history, and their real secrets from modern man’s greed.

As a young man, author David Thomas Stone worked as a ranch hand and as a contractor-developer of commercial properties. He worked in the oil fields of South America and gold fields in Montana and on large pipeline projects in the US. He was a radio and television broadcaster for a short while, an adventure seeker, avid sailor and diver. In the heyday of the new computer industry, he was a principal in the early internet business and a company that provided entertainment and internet services via a custom national network. Ultimately, he became a technical writer, producing fiction and real stories in books and magazine articles for the computer industry.

Stone writes, “Most of us remember a time in our life when we found ourselves alone, surrounded by darkness, and experiencing a real feeling of danger that sometimes we cannot suppress. The hair begins to stand up on the back of our necks and on our forearms. Our hearing becomes acute, and our ears pick up every little crack and sound in the dark. We strain to see, and we instinctively quicken our steps toward some distant light.

As adults we know better, when we return to the light there is always a sense of relief, and we feel a little foolish. But for that moment, alone in the dark, we cannot suppress this powerful inner feeling that some unknown imminent danger may be very near us. This is our natural survival instinct imbedded in our DNA. Because at one time, not that long ago, there was something in the dark...”

Published by Page Publishing, David Thomas Stone’s compelling book weaves an intriguing tale as he melds ancient times with the present and is sure to keep readers engaged and entertained.

Readers who wish to experience this fascinating work can purchase “Legend of the Jerawoc: Predator of Man” at book distributers and good bookstores everywhere, or online at the Apple iTunes Store, Amazon, Google Play, or Barnes and Noble.

Stone continues, “This it, the stories of the people of the Great Blue Ice Wall, the surviving Nezbeth people from twelve thousand years ago, their secrets and the story of the Death that comes in the night.
Or go to http://www.davidthomasstone.com

The Legend of the Jerawoc.
In ancient times the people of The Great Blue Ice Wall understood and accepted that when nature’s natural predator of man, the Jerawoc, came in the night, they had no way to defend themselves and everything to lose. Until one very young boy survives and swears to dedicate his life on the graves of his dead family to avenge their slaughter. To do this he must do the unthinkable and learn to kill the most ferocious predator known to man. The story starts 12,000 years ago and continues to present times.

About Page Publishing:
Page Publishing is a traditional, full-service publishing house that handles all the intricacies involved in publishing its authors’ books, including distribution in the world’s largest retail outlets and royalty generation. Page Publishing knows that authors need to be free to create, not mired in logistics like eBook conversion, establishing wholesale accounts, insurance, shipping, taxes, and so on. Page’s accomplished writers and publishing professionals allow authors to leave behind these complex and time- consuming issues and focus on their passion: writing and creating. Learn more at http://www.pagepublishing.com.