Miami. 1992. Hurricane Andrew brought them together. Root High may tear them apart. 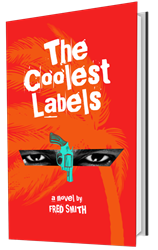 The central characters in The Coolest Labels have backstories that are deeply rooted in the key events that shaped Miami’s history--the Cuban Revolution, the Miami Riots, the Mariel Boatlift.

“She always knew her father was a racist and an a**hole, but she found out what he was really capable of the night he disappeared into the hurricane.”

So begins The Coolest Labels, the debut novel by Fred Smith about a group of disparate, Miami teenagers trying to put their lives back together in the fall of 1992 in the immediate wake of Hurricane Andrew.

Smith grew up in Miami’s South Dade County, where Andrew’s destruction was severe. The Coolest Labels is loosely based on his own high school experience in the early 1990s.

“What people who went through Hurricane Andrew didn’t realize then, especially teenagers like we were at the time,” the author says, “was the amount of trauma we walked around with after the storm passed.”

That trauma proves to be a compelling device that fuels The Coolest Labels with angst and tension from the first page to the last. The ruins of South Dade County serve as a haunting backdrop against which the story’s troubled teens navigate their way through their last year of high school, a year Smith makes sure is wrought with turmoil.

The Coolest Labels teems with the kind of historical accuracy and local knowledge that could only come from a native. The main characters have pasts rooted in the key events that have shaped Miami’s cultural history over the last 70 years, including the Cuban Revolution, the Mariel Boatlift, and the Miami Riots of 1980.

Now, these characters have endured the trauma of a hurricane. Smith keeps us wondering until the book’s final words if the shared experience will bring them together or lead to a second coming of the riots.

“It’s not that high school kids from South Dade in the early ’90s were drastically different from kids around the country at the time,” Smith says, “but at my school, they were different from each other. That’s what I’ve tried to capture in the book. And that’s what makes The Coolest Labels a high school story you’ve never experienced before”.

The Coolest Labels will be available on Amazon.com and other online retailers on August 24, 2019--27 years to the day when Hurricane Andrew unleashed devastation on South Florida.

Fred Smith grew up in Miami, Florida. He and his family lived off SW 152nd Street in a home that was destroyed by Hurricane Andrew. The Coolest Labels is his first novel and is loosely based on his own high school experience in the wake of the storm. He’s also written The Closet: stories and Invisible Innocence: my story as a homeless youth with Maria Fabian.