Author Herbert Williams’s new book “The Boy Who Wanted to Fly” is a biographical work celebrating the life of and service of a true patriot and pioneering naval aviator.

Recent release “The Boy Who Wanted to Fly” from Page Publishing author Herbert Williams is an engaging portrait of a military pilot, Vietnam veteran, and one of the first African Americans to achieve the rank of Rear Admiral in the US Navy. 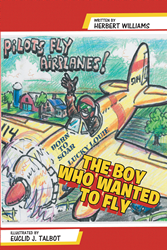 Herbert Williams is a father, grandfather, great-grandfather, and retired educator and administrator who was appointed by two Michigan governors to the State Board for Libraries. He has completed his new book “The Boy Who Wanted to Fly”: an inspiring story of perseverance, patriotism, and the determined pursuit of the American Dream.

Herbert writes, “This book is about a profile in courage. This young man thought the sky was the limit. He wanted to fly an airplane. This feat was easier said than done. Louis had to negotiate his way into college before he joined the US Navy. Then, he had to find a way to get into flight school.

"After finishing flight school, he found that he had to fight a war in Vietnam. Now, you might think that his exploits would end. However, his superiors decided that Louie should teach flight school. He took the gig with caution because of its immense responsibility.

"Then, his superiors rewarded him with the commission of Rear admiral in charge of an aircraft carrier. While he was in Portugal, Louie met and married a young Portuguese girl. When his tour of duty ended, this retired sailor climbed one of the highest mountains in the world.

Published by Page Publishing, Herbert Williams’s engrossing book is a fascinating portrait of a great American and a true hero.

Readers who wish to experience this engaging work can purchase “The Boy Who Wanted to Fly” at bookstores everywhere, or online at the Apple iTunes store, Amazon, Google Play, or Barnes and Noble.