Author Jude Shaw’s new book “Leaving Dahomey: Book One” is an evocative tale set in an ancient kingdom with a rich culture and history prior to annexation by the French

Recent release “Leaving Dahomey: Book One” from Page Publishing author Jude Shaw is the first volume in the Friendlytown series, a trilogy depicting five generations of women descended from a large family in the ancient African kingdom of Dahomey. Book One introduces Adeoha, a young woman dreaming of a life beyond the confines of her village. 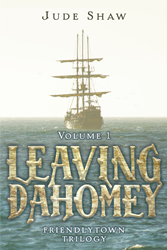 Jude Shaw has completed his new book “Leaving Dahomey: Book One”: a spellbinding story of nineteenth-century Africa, set in the ancient land presently known as Benin.

It was September of 1840, and the ancient West African Kingdom of Dahomey was ablaze. The lives of its people were once again returning to the normal round after another one of King Guezo’s warring campaigns. The campaign had been waged some eighty miles north of Abomey against the Attahpahm people. Guezo had marched with thirty-eight thousand men and women. For the fifteen thousand soldiers of the standing army, including five thousand Ahosi, the elite female troops, it was a matter of course. But the soldiers who were not a part of the regular army—almost five thousand strong and eighteen thousand commissariat followers—they were just happy to return to their lives as peaceful farmers, traders, merchants, craftsmen, and artisans. A soft breeze caressed the land, visible by the sway of the trees and the grass. Birds sang atop a baobab tree. The harvest season has ended and the time of the harvest of the palm trees is near. It's a time of celebration, a time to thank the earth Vodun for life, the sky Vodun for rain, and the ancestors for their guidance.

Published by New York City-based Page Publishing, Jude Shaw’s book is an enthralling glimpse back in time to a keenly ambitious and adventurous young woman making her way in a storied nineteenth-century African kingdom.

Readers who wish to experience this engrossing work can purchase “Leaving Dahomey: Book One” at bookstores everywhere, or online at the Apple iTunes store, Amazon, Google Play, or Barnes and Noble.