Debut novel, TEARS OF THE PHOENIX by first time author Lonnie Beerman, delivers a gripping coming of age story set in the Vietnam-era South. Readers will laugh, cry, and feel as if they personally know the characters, yearning to know more about each. 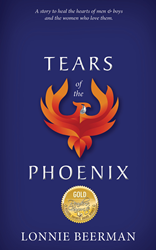 A tender and gripping coming of age story

Readers will laugh, cry, and yearn for more.

Author Lonnie Beerman shines with his debut novel TEARS OF THE PHOENIX (Clovercroft Publishing, September 10, 2019). He does an outstanding job of bringing to life the story of three boys whose new-found, yet deep friendship, helps them cope with numerous life-altering challenges.

His forceful opening and dramatic narrative style pulls readers' quickly inside the fortunes and fate of the main characters. With story lines that resonate with many of today's fragmented, frenetic, and frightening headlines, he offers hope and faith in the ultimate support of friendship, family, and community.

Kirkus Reviews says, "Beerman's detailed narrative and meticulous account of three adolescents in the Vietnam-era South deftly creates an intimate picture of the period when childhood imagination can serve to weather crisis, from ordinary childhood insecurities to major traumas that provides an escape from harsh realities of adult disillusionment."

Like the best-selling Where the Crawdads Sing, Beerman captures the perspective of youth while dealing with the challenges of adult living. Gracefully, weaving an emotional web of past and present, family secrets, adolescent angst and variances on romance, he delves into the  complexities of family relationships offering insight into the importance of love, friendship, and acceptance. Throughout, the young characters remain at the center of the story even when adult experiences loom large.

Readers will laugh, cry, and feel as if they know the characters personally, yearning to know more about each. Above all, Tears of the Phoenix is a window into the innermost thoughts and feelings of boys and men, the impact of their friendship, and it's life-long thread in people's lives. A story to "heal the hearts of men and boys and the women who love them."

About the Author:
Lonnie Beerman was born in Ft. George Meade, Maryland Army Hospital in 1956. The son of a Master Sargent and fourth of six children, Lonnie experienced life from a unique perspective. Moving from one base to another, one state to another, one country to another allowed him to develop a cornucopia of interests and hobbies, ranging from building model cars (and planes & ships) as a young boy to building muscle cars as a much older boy. He loves his dogs and camping. He is an avid history buff, coin collector and gardener.

One special interest he developed was his love of writing. Once he learned to read, he wanted to write. He wrote scribbled stories in Number 2 pencil to entertain his friends, and later filled school notebook pages with his overthought musings. He penned many articles, parodies and opinions for school newspapers and company newsletters. He authored countless technical reports and specifications, as his career required, but his love has always been fiction, based on as much reality as possible, but always with emotion and passion.

In 1978, while living in Portland, Oregon, Lonnie met and married his Persian princess, and in 1980 their daughter was born. They moved to Texas in 1982 and their son was born in 1986. Their daughter is an Iraq War army veteran and a successful businesswoman. Their son is a flourishing defense attorney.

For forty years, his professional life as a Senior Certified Plumbing &Piping Designer on large scale projects such as hospitals, refineries and airports in various parts of the world allowed Lonnie to see different cultures from a real, non-tourist perspective, and to get to know the different people and experience different cultures whenever he was able.

In 2003, the loss of his beloved older brother Bud profoundly affected Lonnie, as Bud was the family storyteller, and the stories had stopped. Though heartbroken at his loss, Lonnie has taken up the gauntlet, and the stories continue…