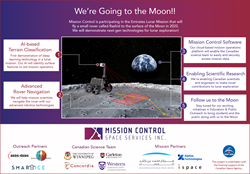 By demonstrating this new technology on the Moon, we will not only unlock potential autonomous decision-making capabilities for future rovers, but better support planetary-science missions going forward.

Mission Control Space Services Inc. (Mission Control) is pleased to announce that it is poised to open an exciting new chapter in Canadian space exploration thanks to a $3.04M contribution from the Canadian Space Agency’s Lunar Exploration Accelerator Program. These funds will enable Mission Control to demonstrate artificial intelligence (AI) and robotics technologies on a new lunar mission, positioning the company as a leader in computer applications for space exploration.

“With the support of the Canadian Space Agency, Canadian scientists and engineers will be able to participate in near-term missions to the lunar surface,” said Ewan Reid, president and CEO of Mission Control.

Along with its subcontractor, Xiphos Systems Corporation, Mission Control will demonstrate a cutting-edge AI-integrated flight computer on the Emirates Lunar Mission (ELM), an international micro-rover mission led by the Mohammed Bin Rashid Space Centre in the United Arab Emirates, launched on a SpaceX rocket and delivered to the Moon by ispace of Japan in 2022. As a first for space exploration beyond low Earth orbit, this navigation computer installed as a payload on the ispace lander will host an AI application that harnesses deep-learning algorithms in an edge-computing architecture to recognize geological features in visual images as the rover drives around the lunar surface.

The outputs from the AI image classifier will be transmitted back to Earth for analysis by Mission Control and its academic partners at Concordia University, University of Winnipeg, Western University and Carleton University. These investigations will make use of the cloud-based Mission Control Software platform to enable the Canadian team to easily and securely access and visualize mission data.

Working alongside outreach partners at SmartICE, Rocket Women, and Students for the Exploration and Development of Space, Mission Control is also planning to engage students, underserved communities, and the wider public in what promises to be one of the first demonstrations of Canadian computing technologies on a lunar mission. By creating iconic moments for Canadian space exploration, the company hopes to inspire the next generation to reach for the stars.