Back by Popular Demand, International Supermodel & Actor Tyson Beckford To Return To Chippendales As Guest Host With A "Tyson Takeover" This Fall At The Rio in Las Vegas

A “Tyson Takeover” will keep the Las Vegas summer heat scorching through the Fall as Chippendales® announces the return of international supermodel, fashion icon and actor, Tyson Beckford as celebrity guest host. After breaking box office records during his previous engagements, Beckford returns to the award-winning male revue at Rio All-Suite Hotel & Casino for six weeks only, Sept. 27 through Nov. 3, 2018 (Thursday through Saturday performances). 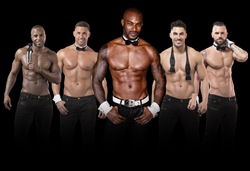 A “Tyson Takeover” will keep the Las Vegas summer heat scorching through the Fall as Chippendales® announces the return of international supermodel, fashion icon and actor, Tyson Beckford as celebrity guest host. After breaking box office records during his previous engagements, Beckford returns to the award-winning male revue at Rio All-Suite Hotel & Casino for six weeks only, Sept. 27 through Nov. 3, 2018 (Thursday through Saturday performances).

“We are thrilled to bring Tyson back,” says Kevin Denberg, Managing Partner, Chippendales. “Our audiences have grown accustomed to Tyson; his star-power, charisma and sex appeal are the perfect compliment to our already sexually charged show.”

The critics agree that Tyson is the one the girls want - the Las Vegas Sun commented, “Fans of Beckford will not leave the show disappointed, as he not only flexes his buff bod throughout the adult male revue, but also bares his backside in a solo act with a female member of the audience…Beckford fits like a glove in Chippendales.”

“This last year has been amazing with some new television and film projects but, being asked back to join my brothers at Chippendales on stage is always an honor,” said Beckford. “I love Vegas and the cast and any chance I have to perform for live audiences is always a guaranteed good time - I can’t wait to put on those cuffs and collars again.”

In November 2017, Chippendales was honored for the sixth consecutive year as the “Best Male Revue” at the prestigious Best of Las Vegas! Awards. The show succeeds in bringing every sexual fantasy to life in an intimate, immersive environment that is perfect for any Girls Night Out. Whether looking to celebrate their bestie’s bachelorette party in Las Vegas, their big birthday bash or just a have wild night, Chippendales provides the perfect backdrop to let loose and have fun in Las Vegas.

About Tyson Beckford:
Born in New York, Tyson lived in Jamaica until the age of seven and was destined, by name and person, to help give birth to and become synonymous with the term "male supermodel" from the moment his image was first captured by a photographer's lens in 1993. His arrival on the fashion scene coincided with the era that brought male models to the forefront of advertising and stifled the notion that "real men" and fashion did not exist on the same plane. Tyson's modeling career took off when he appeared in the Fall 1994, Polo Sport campaign shot by Bruce Weber. He soon landed an exclusive contract with Ralph Lauren apparel, which subsequently lasted five years and also spent three years as the spokesmodel for Polo Sport Fragrances. The resulting campaigns heralded a new direction for the Ralph Lauren/Polo Sport brand and created an international following of Tyson fans. His admirers around the world have helped raise Tyson's image to that of a brand unto itself as indicated by the sales volume of his annual calendar. He has appeared on covers and in countless editorials for Details, GQ, Essence, The Face, L'uomo Vogue, and The New York Times Magazine, among many others. Tyson was named one of People Magazine's “50 Most Beautiful People”; “Best Male Model” at the inaugural VH-1 Fashion and Music Awards; “Outstanding Male Model of the Year” at the fashion industry's Michael Awards; and, People Magazine also named him “Sexiest Male Model.” He has starred in a number of music videos including 50 Cent's chart topping “21 Questions,” and the Grammy Award-winning songs “Toxic” by Britney Spears and “Unbreak My Heart” by Toni Braxton. Tyson has also appeared on many television programs including “America’s Next Top Model” with Tyra Banks, “Hollywood Squares,” ABC’s “My Wife and Kids,” and he hosted the reality series “Make Me A Supermodel” on BRAVO. Tyson's film credits include “Into the Blue,” “Zoolander,” “Biker Boyz” and “Kings of the Evening.” In 2008 he was featured in and produced the movie “Hotel California,” directed by Geo Santini and, he recently co-starred in “Addicted.” Having progressed from fashion model to fashion icon, the worldwide recognition his career has brought him belies the fact that there's more to Tyson than meets the eye. International success has taught him "to be humble and not to rush things" while his experience has also steered him towards "a life that is more spiritual and calm". Now Tyson makes his home in Florida and, when he finds time, he enjoys working on his cars and motorcycles.

About Chippendales:
Named “the most-wanted men in Vegas!” by ET’s, The Insider, Chippendales captures the perfect balance of sex appeal and tasteful teasing, eliciting waves of screams from their excited audience. This high energy, fully choreographed, interactive show features some of the most physically elite men in the world who playfully dance and sing their way into the hearts of birthday girls, bachelorettes and girlfriends who just want to have fun. In November 2017, for the sixth consecutive year, Chippendales was named the “Best Male Revue” for the Las Vegas Review Journal’s prestigious “Best of Las Vegas Awards.” Annually, the Men of Chippendales will be seen by almost two million people worldwide. The cast, a very exclusive fraternity of only 20 members, is split across two productions – one based in Las Vegas at the Rio All-Suite Hotel & Casino and the other, currently selling out venues around on their world tour. As icons of American Pop Culture, The Chippendales recently celebrated their 39th Anniversary as a brand and in 2018 celebrated 16 years at Rio All-Suite Hotel & Casino with nearly 7,000 performances. They’ve been featured on numerous national television shows, including the Emmy Award-winning CBS series, The Amazing Race, The Ellen DeGeneres Show (where TV legend Betty White received a special surprise performance), and The Real Housewives of Beverly Hills (giving Lisa Vanderpump a night she will never forget). Previous celebrity guest hosts featured in the Las Vegas production include international supermodel Tyson Beckford, Dancing with the Stars and America’s Next Top Model winner Nyle DiMarco, Beverly Hills 90210 and Sharknado star Ian Ziering, Dancing with the Stars Mirror Ball winner Tony Dovolani, Joey Lawrence, and celebrity blogger Perez Hilton, among others. Chippendales, one of the world’s most recognized brand names, is the premier provider of entertainment for women. The Company produces Broadway-style shows worldwide and licenses its intellectual property for select consumer products ranging from apparel and accessories to slot machines and video games. The company also operates Chippendales.com, an on-line lifestyle and entertainment destination for women. Chippendales® was established in 1979 and has headquarters in New York, with offices in Las Vegas and London. For additional information visit http://www.Chippendales.com; find us on Facebook, Twitter and Instagram @Chippendales #Chippendales.

About Rio All-Suite Hotel & Casino:
Rio All-Suite Hotel & Casino, home of the World Series of Poker, offers guests a unique all-suite hotel experience. Complete with 2,522 all-suite hotel rooms – including the Samba suites and the luxurious Palazzo Villas with a private entrance – the property overlooks the Las Vegas Strip and sits one block west of the famed boulevard. A variety of entertainment options at the resort include headliners Penn & Teller, the world-famous Chippendales and the internationally-acclaimed water production, WOW. Additionally, Rio Las Vegas is home to family-friendly attractions such as the VooDoo Zip Line, an adrenaline-rushing thrill ride that offers a 360-degree panorama of the famous Strip from 490 feet above the ground, as well as KISS by Monster Mini Golf. The off-Strip resort features a diverse array of dining and nightlife experiences including the new Guy Fieri’s El Burro Borracho, VooDoo Steak, Wine Cellar & Tasting Room, Hash House A Go Go, KJ Dim Sum & Seafood, iBar, VooDoo Beach and VooDoo Rooftop Nightclub, which offers panoramic views of The Strip. Rio All-Suite Hotel & Casino is operated by a subsidiary of Caesars Entertainment Corporation. For more information, please visit riolasvegas.com or the Caesars Entertainment Las Vegas media room. Find Rio All-Suite Hotel & Casino on Facebook and follow on Twitter and Instagram.

Chippendales Performance Schedule at Rio All-Suite Hotel & Casino:
Chippendales performs nightly at 8:30 p.m., with additional shows on Thursday, Friday and Saturday at 10:30 p.m. Tyson Beckford’s Chippendales limited engagement begins Thursday, Sept. 27, 2018 (Thursday through Saturday night performances only) through Nov. 3, 2018. Tickets range from $64.95 to $165.09 + tax and fees (18+) and can be purchased by calling (702) 777-7776 or by visiting http://www.Chippendales.com.