BackStory Looks at the Relationships Once Considered Illicit or Prohibited

This week's episode of BackStory explores the love that challenged social norms and transcended class, race, and gender 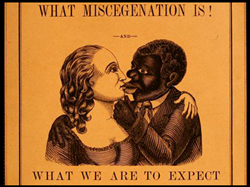 Image taken from "What miscegenation is! : and what we are to expect now that Mr. Lincoln is re-elected." by L. Seaman, 1865. Source: archive.org

BackStory, an American history podcast produced by Virginia Humanities, releases “Love Off Limits: A History of the Relationships Once Considered Taboo in America.”

BackStory celebrates love with an episode about the relationships that challenged social norms and transcended class, race, and gender in American history. Brian Balogh, Nathan Connolly and Joanne Freeman explore how people subverted laws banning interracial marriage, the development of the first queer African American community networks during the 1920s and why a wave of heiresses running away with their coachmen caused a moral panic in the Gilded Age.

“Love Off Limits: A History of the Relationships Once Considered Taboo in America,” is available now. Find it and every episode of BackStory on the website (http://www.BackStoryRadio.org) or on popular podcatchers including iTunes, Spotify and Google. BackStory publishes every week at noon and is available for free.

About BackStory: BackStory brings historical perspective to the America of today. Each week, U.S. historians Ed Ayers, Brian Balogh, Joanne Freeman and Nathan Connolly look at current issues and trace them back to their roots in American history. From the days of the Early Republic to the 21st century, BackStory reveals the connections (and disconnections) between the past and the present. BackStory makes history accessible for listeners – not only in the United States, but around the globe.

BackStory is available for free on Apple Podcasts, Google Play, Spotify, Stitcher and other apps. Get new episodes delivered directly to your device by following BackStory on your preferred podcatcher. New to podcasts? Just search for BackStory (and look for the blue logo in the “Society and Culture” category) and then click “Subscribe.”