Brian Miliate CFO of Baker Electric Inc. and Baker Electric Solar received the 2014 CFO of the Year Award in the Large Privately-held Company category from the San Diego Business Journal. 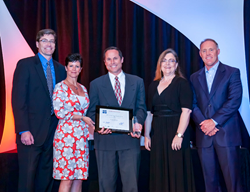 Nominated by Ted Baker, President of Baker Electric Inc., Miliate was honored as a top CFO for his leadership of Baker Electric Inc. to its current level of financial success. Under his fiscal direction, revenues increased more than 64 percent over his eight years with the company. With the construction industry coming off its worst 5-year period, the fact that Baker Electric Inc. maintained its profitability and increased revenues with currently 370 employees speaks to the caliber of Miliate’s financial vision and leadership. Based on revenues, Baker Electric Inc. ranked #24 on the San Diego Business Journal 2013 Largest Privately-held Companies list and #14 based on number of full-time employees on the 2014 Largest Organizations Headquartered in North County list.

In addition to serving as CFO for Baker Electric Inc., Miliate is CFO for Baker Electric Solar. For two years (Spring 2011- Spring 2013) he served a dual role as CFO and general manager of the Baker San Diego solar business – leading it through significant growth, bringing it financial profitability with national and local award-winning recognition.

In addition to his financial direction, Miliate’s executive leadership touches a number of departments. As a top C-level executive at Baker Electric, Miliate has a friendly smile for everyone. Whether in the halls or in the parking lot, as a member of the family he makes himself available – which is not necessarily the case in companies where accounting is on the top floor and the executive team may be isolated from employees. Miliate prepares with the executive team for three Town Hall meetings each year to provide transparency on financials across the company.

“Brian’s professionalism, unyielding integrity, and good-natured style make him a person that naturally generates a calm strength that company employees gravitate to and feel comfortable around,” said Kim Molzahn, Director of Human Resources.

Miliate saw an opportunity to get the company involved in the community by supporting the College of Business Administration (CoBA) at California State University San Marcos Senior Experience Program. He authorized the company’s sponsorship of seven Senior Experience Projects. As a local business executive, Miliate participated in the Junior Achievement education program teaching financial literacy to high school students over seven weeks. In his local community, Miliate has served as a member of the board of directors for two American Heritage Charter Schools: Escondido Charter High School (ECHS) and Heritage K-8 Charter School (HK-8) since 2007. In addition, he has held positions or been involved in the Grace Lutheran Church and Schools: finance committee, administrative council, visioning committee, and school advisory board.

“Brian brought a new business perspective to Baker Electric Inc. in 2006. It’s because of his thinking outside the box – taking tried and proven sophisticated financial strategies and adapting them to the highly complex electrical construction industry that he has been able to contribute to our success story,” said President Ted Baker. “With the demand for renewable energy, Brian has played an active role in our pursuit of solar residential projects—with award-winning Baker Electric Solar the result.”

“It’s a great honor to be selected as one of San Diego’s top CFOs,” said Brian Miliate. “It was definitely made possible because of the Baker family of employees’ commitment to excellence, our customers, and our standout company culture.”

The San Diego Business Journal hosted its eighth annual awards program to honor the men and women who are the financial stewards of San Diego’s business, government and nonprofit sectors.