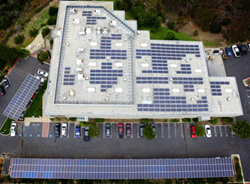 The installation of 517 Hyundai 325W solar modules will produce roughly 76% of the military insignia company’s annual electricity needs and save about $51,000 on their energy bill the first year.

Doing business with a company that has faithfully served our armed forces is an honor. We are extraordinarily pleased Vanguard trusted Baker with their new system,” said Baker’s Director of Commercial Solar, Scott Williams.

When asked why Vanguard chose to go solar, Executive Vice President / COO, Michael Harrison said, “Our utilities have continued to go up and up. We felt switching to solar was the right choice because of the economics as well as doing our part to become environmentally more responsible. My partner recently put solar on his home, and it has been very successful. We chose Baker Electric Solar because of its longevity and customer service. It was a pleasurable experience from the start to finish with Baker’s on-budget, on-time completion.”

Founded in 1918, Vanguard Industries has an impressive history serving US armed forces and related organizations. They are the nation’s largest supplier of military insignias, as well as military patches, badges, uniform accessories, luggage, jewelry and more. In addition to its Carlsbad West Coast facility, they also have a facility in Norfolk, Virginia.

According to the EPA Greenhouse Gas Equivalencies Calculator, Vanguard’s new solar system will save the equivalent of annual greenhouse gas emissions from 420,631 miles driven by an average passenger vehicle. It will offset CO2 emissions from 19,879 gallons of gasoline consumed or 189,758 pounds of coal burned.

“Precision-designed solar is a Baker hallmark, so working closely with Vanguard to create and install the perfect system to meet their energy and cost-cutting objectives was imperative,” said Baker’s Director of Commercial Solar, Scott Williams. “Doing business with a company that has faithfully served our armed forces is an honor. We are extraordinarily pleased Vanguard trusted Baker with their new system.”

About Vanguard Industries West
Vanguard Industries is the largest distributor of military insignia to the Soldiers, Sailors, Marines, Coast Guard, and Air Force personnel in the United States. Working in partnership with the various military branches is an honor and a privilege. Soon we will celebrate our 100-year Centennial and look forward to another 100 years of military support. For more information visit https://www.vanguardmil.com.