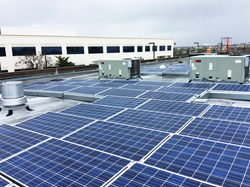 The Jewish Family Service will see a 70 percent reduction in their annual electricity bills based on past consumption and will save an estimated $76,000 in energy costs in the first year.

When combined with the California Solar Initiative rebate of more than $147K, the solar system will provide more than $2.5M in net savings to the agency over the 25-year warranted life of the solar modules," said Scott Williams.

Baker Electric Solar, a full-service solar company, designed and installed a 216 kW rooftop solar system consisting of 864 Hyundai 250W panels with 13 Solectria inverters on two buildings for the Jewish Family Service of San Diego (JFS). The agency will see a 70 percent reduction in their annual electricity bills based on past consumption and will save an estimated $76,000 in energy costs in the first year. The JFS Joan & Irwin Jacobs Campus is located at 8788 and 8804 Balboa Avenue, San Diego, California.

The organization’s values and mission prompted adding a solar system to the JFS remodel project, which also include Solatubes and water-wise landscaping. Hughes Marino, Inc. Construction Management provided JFS with three solar companies to interview for the design and installation of its solar system. After a comprehensive review, they chose Baker Electric Solar.

Solar savings will go directly towards funding JFS programs that serve citizens of San Diego. The Jewish Family Service of San Diego was founded in 1918 by the “Jolly Sixteen”— a group of sixteen women who were committed to making a difference in people’s lives. Today, the organization has grown into a premier human services agency in San Diego serving more than 20,000 individuals, families and older adults.

“As a Jewish agency we are guided by the Jewish value of Tikkun Olam – a concept defined by acts of kindness performed to perfect or repair the world. We are committed to being a responsible steward of our community, environment and planet,” said Guinevere A. Kerstetter, CGMA, CFO of Jewish Family Service of San Diego. “Baker’s proposal best fit our needs of the three we reviewed. They helped us examine multiple finance options. In the end, we found it preferable to purchase the system. Baker held our hand all the way through the project. We were impressed with their professionalism, quality of materials, daily communication and outstanding safety measures.”

According to the EPA Greenhouse Gas Equivalencies Calculator, Jewish Family Service’s new solar system will save the equivalent of annual greenhouse gas emissions from 572,792 miles driven by an average passenger vehicle. It will offset CO2 emissions from 26,893 gallons of gasoline consumed or 255,032 pounds of coal burned.

“The Jewish Family Service solar project is in direct alignment with its mission to build a stronger, healthier and more resilient San Diego,” said Baker’s Director of Commercial Solar, Scott Williams. “When combined with the California Solar Initiative rebate of more than $147K, the solar system will provide more than $2.5M in net savings to the agency over the 25-year warranted life of the solar modules. It’s great to know these funds will help and feed many people over the years.”

About Jewish Family Service of San Diego
Jewish Family Service is a client-centered, impact-driven organization working to build a stronger, healthier, more resilient San Diego. Since 1918, Jewish Family Service of San Diego has been a trusted community resource for individuals and families in times of need. Our wide range of integrated services Empower Individuals & Families to Move Toward Self-Sufficiency, Support Aging with Dignity, and Foster Community Connection & Engagement throughout San Diego County and the Coachella Valley. JFS was named a 2016 California Nonprofit of the Year and for the ninth consecutive year, JFS earned a coveted 4-star rating from Charity Navigator, America’s largest independent charity evaluator that highlights the work of efficient, ethical and open charities. JFS provides essential services to people regardless of religion, race, color, ethnicity, national origin, ability, gender identity/expression, or sexual orientation. To get help, volunteer, or to learn how JFS empowers change in our community, visit http://www.jfssd.org.