Ban on Cryptocurrency Could Spell Disaster for the Indian Economy: Raj Chowdhury

The mist surrounding crypto in India grows denser every passing day as the center is still encapsulated in their ‘indecisive’ space while the Fintech sector speculates the possible outcome. HashCash Chief and Blockchain pioneer, Raj Chowdhury weighs in on the gravity of the matter and what a crypto ban would mean for the Indian economy in the not so long run. 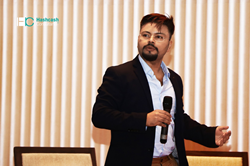 By banning crypto, India will end up with the lowest reserve of the most important currency the world has ever seen. This would eventually lead to a currency devaluation of the worst form.

The mist surrounding crypto in India grows denser every passing day as the center still resides in their ‘indecisive’ space. The negative mindset of a section of the cabinet is no secret. The prolonged indecisiveness has led many to deduce this as a prelude before a ban.

HashCash CEO, Raj Chowdhury feels strongly about the way the scenario unfolds. “Rejecting the crypto as an asset class may have many grave implications. Maintaining Cryptocurrency reserves are as important as maintaining dollar reserves. By banning crypto, India will end up with the lowest reserve of the most important currency the world has ever seen. This would eventually lead to a currency devaluation of the worst form,” he remarks.

India for its market size and a large educated workforce should have naturally enjoyed the status of a developed economy, if not for the myopic vision of the regulators, who continue to disappoint small businesses, the businesses that generate the bulk of its GDP and employment.

Currency Devaluation entails a string of setbacks that will inevitably distress the economy:

1. Imports would be more expensive (any imported good or raw material will come at a much higher price)
2. Aggregate Demand (AD) would increase – causing demand-pull inflation.
3. Firms/exporters would have less incentive to cut costs because they can rely on the devaluation to improve competitiveness.

A crypto ban under these conditions would reset the economy to its primeval phase.

There are strong doubts around the release of India’s own digital currency, as some dismiss the idea as an intentional diversion. Questions are also raised on the utterance of ‘cryptocurrency’ and the underlying blockchain technology in the same breath.

“These are two distinct and diverse threads that may be accepted independent of each other. While Blockchain is a technology, Cryptocurrency is an asset class. It should not be difficult to implement the two in their respective domains,” adds the blockchain pioneer, author, and keynote speaker.

Despite voicing assurance regarding the acceptance of cryptocurrency as an asset class in India, the balance seems tilted towards a probable ban. The Finance Minister has pronounced on more than one occasion that the center would take a ‘calibrated’ stance on the prospects of crypto. In very specific terms she emphasized allowing a small window for possible experimentations with cryptocurrencies.

“What India needs is acceptance of crypto with the imposition of taxation and regulations, that will earn revenue and benefit the huge number of investors and Indian startup companies who have gone global within a short period,” says Chowdhury, “ rather than depriving the people of their choice of investment by adopting a naive approach towards the crypto.”

As republic governance of the largest economy with a sound technological footing, it is expected to make decisions that would benefit the entire technological and financial sectors. This, especially when the prospects are revving globally and to not be a part of the revolution would inevitably push the economy towards regression.