In a newly published blog post, Harlingen attorney Ric Barrera provides information about non-disclosure agreements and how they do not prevent individuals from reporting suspected fraud as whistleblowers 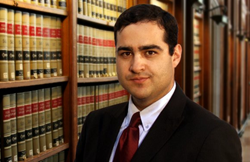 It is necessary that an attorney that is competent to advise whistleblowers be utilized early in the reporting of fraud when a non-disclosure agreement is employed...

South Texas attorney Ric Barrera published today an article about the effect of non-disclosure agreements on individuals who may suspect fraud or abuse of government funds and wish to become a whistleblower.

Barrera cited the example of the recent publication of the American Psychiatric Association's Diagnostic and Statistical Manual 5 about which there has been a great deal of controversy, as noted even in Wikipedia, in regards to possible conflicts of interest that brought criticism from prominent psychiatrists.

Barrera wrote, "In fact, the American Psychiatric Association required its task force members for the new Diagnostic Statistical Manual 5 (DSM 5) to execute a non-disclosure agreement, which essentially eliminated transparency. The DSM is the psychiatric catalog of mental illnesses which has grown to over 370 mental illnesses in its latest rendition, including dubious diagnoses such as reading disorder, disorder of written expression, mathematics disorder and caffeine intoxication disorder. Each named disorder is coded for government and private insurance billing purposes.

"The interesting part about that is that each member of the 27-person DSM-5 task force, those writing and editing the manual, had to sign a non-disclosure agreement and that 69% of those task force members had ties to the pharmaceutical industry, which arguably can be seen to load the deck for voting purposes."

This criticism was noted in the Wikipeida article on the DSM 5 which stated:

"Robert Spitzer, the head of the DSM-III task force, has publicly criticized the APA for mandating that DSM-5 task force members sign a nondisclosure agreement, effectively conducting the whole process in secret: "When I first heard about this agreement, I just went bonkers. Transparency is necessary if the document is to have credibility, and, in time, you're going to have people complaining all over the place that they didn't have the opportunity to challenge anything."[28] Allen Frances, chair of the DSM-IV task force, expressed a similar concern.[29]

"Although the APA has since instituted a disclosure policy for DSM-5 task force members, many still believe the Association has not gone far enough in its efforts to be transparent and to protect against industry influence.[30] In a 2009 Point/Counterpoint article, Lisa Cosgrove, PhD and Harold J. Bursztajn, MD noted that "the fact that 70% of the task force members have reported direct industry ties---an increase of almost 14% over the percentage of DSM-IV task force members who had industry ties---shows that disclosure policies alone, especially those that rely on an honor system, are not enough and that more specific safeguards are needed."[31]"

About Ric Barrera
Ricardo A. Barrera is a South Texas attorney that currently practices law in the Rio Grande Valley. Mr. Barrera graduated with honors from Texas A&M University-Kingsville where he was also elected student body president. Mr. Barrera went on to graduate from Texas Tech University School of Law where he won a national championship on moot court. Mr. Barrera has been commended by both the Texas House of Representatives and his U.S. Congressman for working above and beyond to help others in defending their rights.

He is a legal analyst for KGBT Action 4 News in Harlingen.