The founder of the Russell Law Firm has been selected based on strict criteria, including his track record on behalf of clients, says the firm. 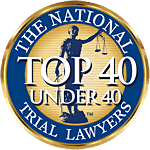 Danny Russell has been selected as one of Louisiana's finest young attorneys.

The Russell Law Firm has announced that personal injury, family law, and DWI specialist Danny Russell, the firm’s founder, has been named as one of the National Trial Lawyers’ Top 40 Under 40 for the state of Louisiana. The lawyers’ organization describes the award as an invitation-only honor that is “extended solely to the select few of the most qualified attorneys from each state who demonstrate superior qualifications of leadership, reputation, influence, stature and public profile.” The organization adds on its website that the young lawyers selected are chosen through a painstaking set of procedures that includes careful background research and nominations from other peers in the legal field.

“I’m thrilled to be chosen by the National Lawyer’s Association as one of the state’s best attorneys,” said Danny Russell. “My interest in the law stemmed from the time when I had been taken advantage of by an insurance company. Because I didn’t know any better, I accepted a low-ball offer for a nasty head-on collision that was the fault of the other driver. I had no idea that the amount the insurance adjustor was offering – which sounded very good to a college student like me – was actually a fraction of what I was entitled to. When I found out, first I got angry and then I realized that personal injury law was the only way to even the score,” said Mr. Russell.

“That led me to Loyola Law School in New Orleans and, eventually, to opening my own practice. I’m proud to say I’ve helped a great many people get not just a fair shake from insurance companies and responsible parties, but the ability to effectively rebuild their lives after suffering a serious injury or a wrongful death of a loved one,” Mr. Russell said.

The attorney adds that he founded his law firm as a means of expanding his practice and helping more people from throughout the state to deal effectively with the aftermath of car accidents and other misfortunes, which are often the most trying periods in an individual’s life. “We are deeply involved in Baton Rouge-area community and it’s a real pleasure to see that we are getting recognized for our ongoing track records of success working on behalf of accident victims,” he said.

The Russell Law Firm provides assistance to people from throughout Louisiana and beyond in a range of legal areas, including personal injury, family law, and DWI. It also provides counsel in the area of gas and oil law for landowners who have been approached by an oil company regarding mineral rights. The firm can be reached at (225) 307-0088 or through its website at https://dannyrusselllaw.com.