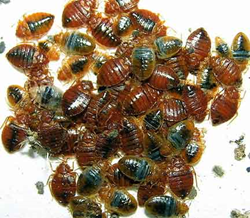 ...of all the bed bug sprays, it only recommended the use of Bed Bug Bully. It asserted that it is the best as it kills bed bugs effectively without the use of harsh chemical ingredients.

In Jefferson City, bed bugs infested two apartment buildings. In connection with it, My Cleaning Products recommended the use of a pesticide-exempt bed bug spray to help the public kill those critters quick and prevent the worst of their effects.

A report from connectmidmissouri.com dated March 28, 2014 said that the two low-income apartment complexes are owned by The Housing Authority. And before this recent outbreak, it related that the buildings have had problems with the crawlies for a number of years in the past.

To resolve the issue, the report relayed that the housing authority treats one to two areas each week as stated by the agency's Executive Director Allen Pollock. It also detailed that when they treat a unit, four more of it are sprayed including the two at both sides, the one below and the other above it.

Here is an excerpt from the post Bed Bugs Got Into Two Jefferson City Housings by My Cleaning Products.

“Bed bugs are a huge problem in Jefferson City. Recently, an outbreak of them was even reported in not just one public housing, but two of them.

Residents said that the latest outbreak was none like they experienced before. And to avoid becoming the critters' next victims, tenants like Sandy Meier and Debra Hardman are becoming extra preventive, taking various steps not to come in contact with those crawlies.”

According to My Cleaning Products, bed bugs could now infest almost any place. But amongst them, it cited that residences, which include houses, dormitories and apartments, are the ones most vulnerable to their presence.

Given that and the fact that bed bugs are sneaky, it said that wherever a person lives, he must always be ready to eliminate the critters. And to do be prepared, it stated that one must get a bed bug spray.

With the product, MCP said that one could eliminate the pesky insects as soon as their presence is confirmed. But of all the bed bug sprays, it only recommended the use of Bed Bug Bully. It asserted that it is the best as it kills bed bugs effectively without the use of harsh chemical ingredients.

The company elaborated that numerous hotels, hospitals and pest-control companies have proven that the Bed Bug Bully could kill those critters, even their eggs and nymphs, quick. Moreover, it shared that it is made of organic ingredients and, therefore, safe. It also shared that it is already on EPA's FIFRA 25(b) list as a pesticide-exempt.

To try the product, MCP invites everyone to get a Bed Bug Bully Complimentary Sample at its official website, mycleaningproducs.com.