Philadelphia implements a new policy against bed bugs, said a report. My Cleaning Products suggested the use of a pesticide-exempt bed bug spray to further help the residents control the spread of the critters. 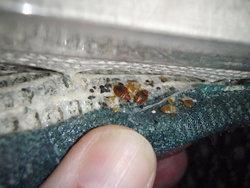 ...it's [Bed Bug BUlly] both effective and safe. It elaborated that it could kill those pests and even their eggs and nymphs in seconds. Moreover, it pointed out that it contains no harsh chemical ingredients and is already in EPA's FIFRA 25(b) list.

Philadelphia has implemented a new policy in an effort to control the spread of bed bugs. A post from newsworks.org relayed the details of it on April 07, 2014. And wanting to also help the residents in controlling the spread of the critters, My Cleaning Products suggested a pesticide-exempt bed bug spray.

Based on the post, the new rule is particularly about the disposal of mattresses and box springs. It detailed that it was patterned in an NYC policy and took effect in February.

The law, relayed the report, specifically requires the residents to seal the mattress and box spring with a protective wrap before trashing them for pick up. Its purpose is to protect the neighborhood and the garbage collector from direct contact with the pesky creatures, it stated.

However, resident Vivian Van Story said that the policy doesn't work, shared the report. Meanwhile, others as Andrew Dalzell, with the South of South Street Neighborhood Association, said that an adjustment period is necessary for it to work, it relayed.

Here is an excerpt from the post Philadelphia Implement New Policy Against Bed Bugs by My Cleaning Products.

“It can't be denied that bed bugs are even more prevalent these days than few years ago. And so, in an effort to curb their spread, Philadelphia implemented a new policy regarding the disposal of bed-bug-infested mattresses.

The city patterned the policy from NYC. It particularly requires the residents to seal the mattress and the box spring in a protective bag before trashing them for pick-up. The purpose of it is to protect the neighborhood and the garbage collectors from direct contact with the critters.”

My Cleaning Products said that by just what they are called, it is easy to say that bed bugs love to invade beds. And given that, it commented that Philadelphia's new policy is indeed a big help in controlling their spread.

However, MCP said that apart from mattresses, those crawlies could infest anything that keeps them closer to their prey, which usually are human beings. Because of that, it asserted that it is essential for everyone to prepare a bed bug spray.

With the product, the company said that one could kill bed bugs promptly. That, in return, prevents them from multiplying, spreading and causing more problems, it cited.

Nonetheless, out of all bed bug sprays, MCP asserted that Bed Bug Bully is the best. As it reasoned, that's because it's both effective and safe. It elaborated that it could kill those pests and even their eggs and nymphs in seconds. Moreover, it pointed out that it contains no harsh chemical ingredients and is already in EPA's FIFRA 25(b) list.

To try the product, MCP invites everyone to visit its website at mycleaningproducts.com and get the Bed Bug Bully Complimentary Sample.