A fire station in Pasco County was reportedly shut down due to bed bugs. In order to help others with the same problem, My Cleaning Products recommended a pesticide-exempt bed bug spray. 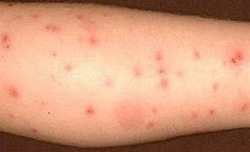 ...Bed Bug Bully makes the elimination process easy. Because it is an organic solution and is even on EPA's FIFRA 25(b) list, it stated that it is also safe.

Fire Station 13 in Pasco County was forced to shut down. And according to a report from wtsp.com dated May 20, 2014, it was all because of the pesky bed bugs. In connection with it, My Cleaning Products recommended an organic-based bed bug spray to help the public kill the critters fast and safe and avoid a similar incident.

The report detailed that the critters were discovered on May 14. And as it relayed, Pasco County spokesperson, Doug Tobin, has already confirmed that two of the station's employees were bitten by them.

On May 19, the officials decided to relocate the employees and to close the firehouse for the bed bug elimination, shared the report. However, it stated that it wasn't yet determined as to when the process will be completed and the station will reopen.

Here is an excerpt from the post Bed Bugs Infest Fire Station in Pasco County by My Cleaning Products.

“Bed bugs in Florida showed up in one Pasco County firehouse. As a result, the station was temporarily shut down.

The critters were particularly detected at the Pasco County Fire Station No.13 in Dayflower Boulevard. They were discovered last week, May 14th.”

My Cleaning Products said that bed bugs could infest any place. Considering that, it asserted that everyone must be wary of their presence, not just firehouses.

In addition, everybody must also be prepared to kill bed bugs promptly, stressed MCP. That way, the worst of their effects, such as closure of the place and evacuation, could be prevented.

But to do that, My Cleaning Products said that one would need the help of a bed bug spray. And as it asserted, Bed Bug Bully is the best to get.

The company cited that Bed Bug Bully makes the elimination process easy. Because it is an organic solution and is even on EPA's FIFRA 25(b) list, it stated that it is also safe. Moreover, it assured that it is effective that it kills not just the adult bed bugs but also their eggs and nymphs.

To experience those benefits, MCP invited everyone to try the product. It shared that one could get a Bed Bug Bully Complimentary Sample at its website mycleaningproducts.com.