Bed Bugs Develop Quickly in Crowd, My Cleaning Products Shares a Method How to Block Them From Increasing Fast

Development of bed bugs speeds up in a crowd, related a report. In response to it, My Cleaning Products shared a trick how the public could prevent the critters from growing in number. 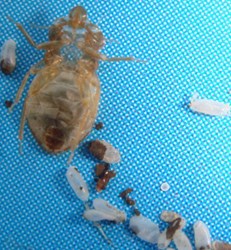 ...it [Bed Bug Bully] is already on EPA's FIFRA 25(b) list. Moreover...hotels, hospitals and pest-control companies had already proven that it is effective in killing those crawlies and even their eggs and nymphs.

A new study about bed bugs revealed that being in a group speeds up their development. And so, to help the public prevent the increase of them and the worst of the problems that they bring, My Cleaning Products shared a way how to kill the critters early.

A post from sciencedaily.com dated January 09, 2014 related that the study was conducted by researchers from North Carolina State University, My Cleaning Products shared. It detailed that it was published on the Journal of Medical Entomology with the title of “Group Living Accelerates Bed Bug (Hemiptera: Cimicidae) Development” also on the 9th of January.

According to the post, the research particularly found out that a crowd of those vampire-like critters hastens the development of their nymphs by 2.2 days. MCP said. Additionally, the study also discovered that bed bug eggs and nymphs could still survive and join a bed bug infestation even without the help of their adults.

Below is a part of the post Bed Bugs Loving the Crowd by My Cleaning Products.

“Bed bugs are known to multiply and spread quickly. And that makes those critters hard to completely get rid.

But that's not just it. A new study has discovered that their living in a group is also significant factor to their continued prevalence.”

According to My Cleaning Products, the finding of this recent study provides a solid reason for anyone to kill bed bugs early. And by doing exactly that, it said that one could block those critters from multiplying fast and causing worse problems. As a result, it stated that it would also save the people from more bed bug bites and expenses.

But to eliminate those pesky insects early, MCP said that an individual must first be wary of their signs. And once any of those hints is encountered, it stated that their presence must then be confirmed and immediately followed-up by a bed bug treatment.

Besides that, the company asserted that a person must also prepare a bed bug spray. However, it stressed that the product to use must be organic-based to protect everyone's health.

But among the organic solutions, MCP only recommended Bed Bug Bully. And as it explained, that's because it is already on EPA's FIFRA 25(b) list. Moreover, it stated that hotels, hospitals and pest-control companies had already proven that it is effective in killing those crawlies and even their eggs and nymphs.

To try it out, MCP urged the public to visit its website at MyCleaningProducts.com and get a Bed Bug Bully Complimentary Sample.