Bed bugs were infesting a bank in New Bedford, said a report. Wanting to help the public protect themselves from the possible transfer of them, My Cleaning Products suggested a pesticide-exempt bed bug spray. 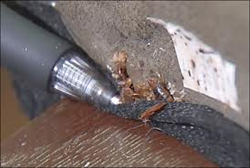 Besides eliminating the adult bed bugs, the company cited that Bed Bug Bully could also kill their eggs and nymphs. And as it pointed out, it is already in the FIFRA 25(b) list for being pesticide-exempt and safe.

A New Bedford bank took a hit from bed bugs. According to report from southcoasttoday.com, its building was under the pest's extensive infestation. And stating that they could further spread from there, My Cleaning Products suggested a pesticide-exempt bed bug spray to help the public protect themselves from the possible transfer of those critters.

Based on the report, dated February 01, 2014, a company supervisor has confirmed the major infestation. And as the record showed, it shared that complaints about the crawlies in the bank have already resulted to several inspections from professional exterminators and the city's health department.

However, the city health director, Dr. Brenda Weis, said in the report that the department's inspectors did not find evidence of the critters in the building. But still, the bank sprayed five times and even offered its 110 employees spray treatment to their residences.

Here is an excerpt from the report Bed Bugs Overrun Bank by My Cleaning Products.

“As you could easily tell by the high number of reports about them, bed bugs have become even more prevalent these past few years. Now, they are common not just in houses and hotels. They've expanded their coverage becoming a familiar yet unpleasant sight in many unexpected places. And this recent news about a New Bedford bank being infested by them is one proof of that.

That bank the critters reportedly overran is at Union Street. A company supervisor described the infestation in it as “very extensive.”

My Cleaning Products stated that this recent news about bed bugs getting into a bank is one proof that the critters are becoming even more prevalent. As it concluded, it is also a warning for everyone to be more wary of the vampire-like pests to decrease the chance of becoming their next victim.

But as it said, taking preventive measures is not the only step one must take in order to ward off the crawlies. It cited that they could be sneaky at times so a person must also ready himself to kill bed bugs promptly. And to do that, it stressed that he would need a bed bug spray.

Of all the products for those critters though, MCP asserted that it would be best to get Bed Bug Bully. It said that it is unlike the majority of pesticides as it is both effective and safe.

Besides eliminating the adult bed bugs, the company cited that Bed Bug Bully could also kill their eggs and nymphs. And as it pointed out, it is already in the FIFRA 25(b) list for being pesticide-exempt and safe.

To try it, MCP said that readers could go to mycleaningproducts.com for a Bed Bug Bully Complimentary Sample.