Two separate reports related that bed bugs recently ousted a man from his hotel room and covered another woman in a shelter with bed bug bites. Wanting to help bed bug victims successfully fight those pests, My Cleaning Products advised the use of the pesticide-exempt Bed Bug Bully. 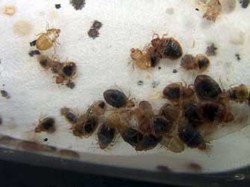 ...it[Bed Bug Bully] was already proven to kill bed bugs in seconds... EPA has already classified it under FIFRA 25(b).

Bed bugs are really prevalent in hotels and other similar places. And according to two reports from wthitv.com and pahomepage.com, those pests recently forced a man to move out from his hotel room and left a woman with bed bug bites all over in separate incidents. In relation with that, My Cleaning Products suggested a pesticide-exempt bed bug spray to hotels, motels and inns. It also recommended its use to the rest of the public as it said that anyone could pick up those critters.

In the wthitv.com report, the man who was forced to vacate his hotel room due to bed bugs was identified as Randy Sims, My Cleaning Products related. He stayed on Econo Lodge in Terre Haute, Indiana, it detailed.

Following Sims' report of the pests, the news said that the hotel then called a pest-control company to clean the room affected, shared MCP. The building connected to it was also set for a bed bug treatment, it added.

Meanwhile, the woman who was left by the critters with bed bug bites all over was determined in the pahomepage.com news post only with the name Karri, said My Cleaning Products. And as it relayed, she was victimized by those vampire-like insects in The Women's Center, Incorporated of Columbia/Montour in Bloomsburg.

Based on Karri's account in the report, she was not informed of the facility's issue with bed bugs for the past few months and that her room was the one infested before, shared My Cleaning Products. And then the morning after that, it stated that she woke up with a dead bed bug on her and bed bug bites all over.

Below is a part of the post about the two bed bug incidents by My Cleaning Products.

"Being the small and terrible pests that they are, bed bugs could bring in a lot of problems. And recently, a man from a hotel in Indiana and a woman who stayed at a shelter in Pennsylvania had a first-hand experience of some of those problems."

"The man bugged by those pesky creatures in Indiana was identified as Randy Sims in a report from wthitv.com. He stayed in Econo Lodge in Terre Haute but was unfortunately forced to move out because of bed bugs."

MCP said that hotels and other places of the same setup are indeed prone to bed bug presence. And because anyone could pick up those pests and bring them home unnoticed, it advised the public to have a bed bug spray prepared.

With the product ready, it said that one could immediately a bed bug elimination process. That prevent bed bug presence from becoming a massive infestation, it stated. Along with that, it pointed out that the treatment is made easier and inexpensive.

Nonetheless, MCP only recommended the use of the pesticide-exempt Bed Bug Bully for the treatment. It cited that it was already proven to kill bed bugs in seconds. Additionally, it shared that EPA has already classified it under FIFRA 25(b). And because those affirm that it is both effective and safe, it asserted that it's best bed bug help anyone could get.

To affirm its benefits, the company urged the public to try Bed Bug Bully themselves. As it shared, anyone could get a Bed Bug Bully Complimentary Sample at MyCleaningProducts.com.