Bed bugs reportedly infested a fire station in Orlando. My Cleaning Products shared some tips how the public could prevent the recurrence of the pests in response to it. 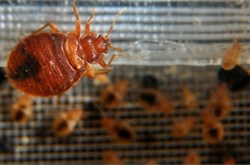 ...being organic-based and a bed bug spray already proven to be efficient by hotels, hospitals and pest-control companies, it asserted that Bed Bug Bully is the best to get.

The pesky bed bugs have returned to Orlando's Fire Station 6. The details of it was shared by wftv.com on its post dated December 10, 2013. In connection with it, My Cleaning Products gave out some tips how the public could prevent the re-infestation of those crawlies.

Based on the report, it was late last month when the crawlies first appeared in city's Fire Station 6, My Cleaning Products shared. Back then, it relayed that the station's mattresses were piled outside the building to get rid of the critters.

However, in this recent re-infestation of the critters, it was said in the report that the pests did not just affect Station 6, MCP related. It detailed that they showed up as well in Station 2 and Station 14.

To resolve the problem, the post said that the fire department purchased new mattresses and bed-covers and scheduled a prompt bed bug treatment, MCP relayed. And though it wasn't officially revealed how much it would all cost, it shared that an expert predicted it would be a $5000-$10,000 worth of expense.

Here is an excerpt from the post Bed Bugs Are Back in Orlando Fire Station by My Cleaning Products.

“Last month, bed bugs caused quite a stir at Orlando Fire Station 6. Mattresses affected by their presence were piled outside and the building was treated to solve the problem. However, the officials confirmed that the pests have returned.”

According to My Cleaning Products, bed bugs aren't just pesky but stubborn as well. Apart from the fact that they are very hard to eliminate, they could also re-infest a place.

However, MCP said that the infestation and re-infestation of those critters are both preventable. To avoid them, it said that one must take preventive steps. And in case the pests get past them, even after the bed bug treatment, it stressed that the precautionary measures must be continually implemented.

Nonetheless, when eliminating the pests, the company said one must see to it that it's done promptly. That way, it said, there are still a few of them, which means there's a smaller possibility of them multiplying.

Additionally, it stated that the product to use in the process must be both effective and safe. And being organic-based and a bed bug spray already proven to be efficient by hotels, hospitals and pest-control companies, it asserted that Bed Bug Bully is the best to get.

As it cited, the product contains no harmful chemicals so it is safe for anyone's health. Moreover, it shared that it is on EPA's FIFRA 25(b) list as pesticide-exempt.

To test the product themselves, MCP shared with the public that there are Bed Bug Bully Complimentary Samples available for them at MyCleaningProducts.com.