Bekins Moving & Storage has taken over as the premier moving company in the Okanagan. 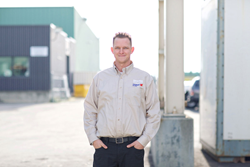 Kelowna movers rapidly expand their operation to fill a void in the Okanagan market.

The market was really dominated by one company,” says Miller. “When that space opened, it was important to jump in before other people could. The name Bekins is new to the area, but we’re not new to the industry.

It wasn’t all that long ago that Nathan Miller was wondering what he’d be doing to earn a paycheque. The market shifted greatly, and Miller's affiliate company, Nathan's Moving, took a hit. However, in the span of a year, he has reinvented himself as one of the premier Kelowna movers in the area.

“It was pretty much a doom-and-gloom situation where I could just curl up in a ball and cry, or I could do something about it,” recalls Miller, upon receiving the news. “I’m not one to lay around waiting. I’m a firm believer that the work is out there, you just have to go out and get it.”

In a little over a year, Miller expanded his company from just three trucks and five employees to an operation that boasts a staff of 22 (and as many as 35 during peak summer periods), 11 trucks and more than 30 pieces of moving equipment. He also consolidated his operation by moving into the old Hiram Walker plant in Winfield. There, he enjoys 12,000 square feet of storage space, with room to expand.

“We just continued to grow,” says Miller. “We’re at 85 per cent capacity already. I’ll probably be looking to expand again in the next six months.”

There was a major vacuum in the market for Kelowna movers, and Miller saw the opportunity and seized it. The first thing he did was reach out to Larry Rosenberg, owner of the Bekins Moving chain.

In becoming the sixth Bekins branch in BC—there are three on Vancouver Island, one in Prince George and another in Richmond—Miller instantly became part of the largest moving company in Western Canada.

“They were one of the first people I reached out to,” says Miller. “We connected pretty quickly and realized that I had some things they needed and they had a lot of things I could use. It was a good fit.”

Through his newfound connection with Bekins, Miller went a step further to become a member with United Van Lines, a North American-wide moving specialist. Not only has this enabled Miller to expand his services, it’s afforded his staff new training opportunities at Van Lines’ head office in Mississauga.

“They have a training facility with a one-bedroom suite fully loaded with basic household contents and furniture,” says Miller. “It’s essentially mover school where they practice and improve their packing, loading and moving skills.”

Bekins Moving and Storage might not be a household name for Kelowna moving companies just yet, but Miller says it soon will be. Servicing an area that ranges from Osoyoos to Kamloops, they doubled the amount of business they did in 2015 compared to 2014.

“The market was really dominated by one company,” says Miller. “When that space opened, it was important to jump in before other people could. The name Bekins is new to the area, but we’re not new to the industry. That’s something we’ve had to work on and establish.”

One thing Bekins does different from other Kelowna moving companies is offer temporary storage at the Winfield warehouse. Not only does this help diversify Miller’s operation, it offers customers a value-added service. If they need their goods held over for a few days, there’s no need to unload and reload, which saves time and money.

About Bekins Moving and Storage
With a history dating back to 1891, Bekins Moving & Storage has developed a trusted reputation across North America. As the largest moving company in Western Canada, Bekins offers a complete range of professional moving and storage services for both residential and commercial customers. This includes services for long-distance and last-minute moving, as well as moving specialty items like pianos, hot tubs, safes and industrial equipment.