Bellus Academy Thanks Veterans for Their Service with Free Services 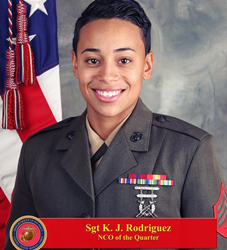 Serving in the U.S. Marine Corps, Krystal Rodriguez discovered the craft of barbering and precision haircutting.

“We are honored to help veterans transition from serving our nation to a career that offers unlimited possibilities to serve and create a meaningful, rewarding career in the civilian sector."

Whether standing on the front lines or behind the chair, beauty and wellness professionals make America an even better place. To thank veterans for their service, Bellus Academy campuses are offering active duty military members and veterans complimentary services on Veteran’s Day, Monday, November 11. All Bellus Academy campuses will be offering military members one of the following complimentary services: haircut, deep conditioning treatment, shampoo and blow dry or gentleman’s barbering facial.

The promotion is personal for many Bellus Academy students and faculty. Currently, 100 veterans are enrolled in programs at Bellus Academy’s campuses. In addition, Bellus counts 769 veterans among its graduates. Krystal Rodriguez) is just one example of a student who has made the transition from Marine to successful barber. Introduced to the craft of barbering in the military, Krystal enrolled at Bellus Academy following her second tour of duty. Since graduating Bellus Academy earlier this year, Krystal’s career journey has been featured in leading beauty publications such as Behind the Chair. She has taken her message about the pathways and possibilities beauty offers as a career to venues ranging from Capitol Hill in Washington D.C. to the Premiere Beauty Show in Orlando.

“We are honored to help veterans transition from serving our nation to a career that offers unlimited possibilities to serve and create a meaningful, rewarding career in the civilian sector,” said Lynelle Lynch, owner of Bellus Academy.