Ben Shapiro and Birch Gold on Inflation, Currency Devaluation, and Precious Metals as a Safe Haven

In the wake of another multi-trillion-dollar stimulus package, Ben Shapiro and Birch Gold’s Phillip Patrick discuss economic consequences for markets and retirement savers. 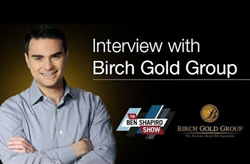 We have a stock market correction. We have inflation, we have currency devaluation. These sort of issues actually draw safe havens like gold and silver up, right? Stocks crash, people flood to gold and silver. 2008 was a great example. They doubled in value.

Shapiro launched the discussion by asking about the value of the U.S. dollar. How will its value hold up in the face of another multi-trillion-dollar stimulus package, especially considering the Fed’s stated intent of keeping interest rates near zero through 2023?

“The first is the reason they dropped them in the first place, which is to encourage spending, right?” Patrick replied. “Low interest rates, encourage people to take money out of savings and essentially invest in the stock market, real estate, bond market. It fuels activity and essentially keeps this thing propped up.”

But low interest rates aren’t just about provoking Americans into spending their stimulus checks. It’s also about the nearly $30 trillion U.S. debt load, according to Patrick, “which is just about manageable for the government because interest rates are so low. If they start to raise rates – and the average rate on our debt federally for the last 30 years has been about five percent – the interest payments on our debt start to become untenable in relation to tax revenue.”

That sounds like a recipe for inflation to Shaprio, “in the if not near future, then in the medium future.”

Patrick agreed with a bit of nuance: “Interest rates in isolation are not necessarily an issue. You couple that with rising inflation, which to some degree is unavoidable. That's when it starts to become problematic.”

If inflation’s so clearly a problem, what’s the solution? Shapiro asked about savings diversification to preserve wealth in an inflationary environment. “Why not put your money into stocks, for example?” he asked.

Patrick agreed that historically stocks “have been a very good hedge against inflation.” The case against stocks in this environment? Timing. Patrick pointed out one strong indicator the epic bull market might be on its last legs: “Price to earnings ratios are at a level today that they've never been at in history without us suffering a fairly sizable correction.” Price to earnings for the S&P 500 at the moment are near the third-highest peak in its 150-year history, 2.5 times higher than the historical average. Reversion to the mean would wipe out about 60% of today’s market cap.

“And how about bonds? A lot of people have been talking about bonds as a safe haven,” Shapiro asked. U.S. Treasury bonds have long been the traditional “safe haven” for pension funds, insurance companies and retirement savings.

Although Patrick agreed bonds are “secure,” unlikely to default, he highlights a completely different concern. In our low-interest-rate environment, “the five year Treasury note today is paying less than one percent annually. According to the government, inflation rates are higher than that today.” Obviously that’s a problem: yields below inflation result in loss of purchasing power.

Shapiro asked about precious metals and their performance in the current climate.

Patrick enumerated economic threats “potentially on the horizon, we have a stock market correction. We have inflation, we have currency devaluation. These sort of issues actually draw safe havens like gold and silver up, right? Stocks crash, people flood to gold and silver. 2008 was a great example.”

How did gold and silver do in the aftermath of 2008? According to Patrick, “They doubled in value.”

Inflation has the power to render that value meaningless, doesn’t it? Not exactly, Patrick explained: “The technical definition of inflation is the rising cost of commodities and services over time. Intrinsically, gold and silver, all commodities by definition, they keep pace. So they're very conducive to climates like this specifically.”

Shapiro wrapped up the interview with a return to inflation concerns. Due at least in part to the Biden administration’s aggressive stimulus and spending policies, it’s “only a matter of time before inflation does, in fact, kick in. We've seen this in the demand for gold. You've seen this in demand for other assets that are not the U.S. dollar bill.”

He’s correct. This year has already seen the U.S. Mint ration gold and silver purchases in the face of record demand. For retirement savers who share Shapiro’s concerns about inflation, who see the same risks as Patrick in the stock and bond markets, Shapiro offers some advice: “Obviously, if you are looking to get involved in precious metals, I trust the folks over at Birch Gold and for good reason because they will give you all straight answers about what kind of investment strategy you want to pursue.”

About Birch Gold Group:
Birch Gold Group, the Precious Metal IRA Specialists, is a leading dealer of physical gold and silver in the United States. The business helps people protect their savings, either for retirement as part of a Gold IRA or Silver IRA, or to take physical delivery of precious metals. It has an A+ rating with the Better Business Bureau (BBB). The Birch Gold team of professionals has decades of combined experience, including past positions with Citigroup, Dun & Bradstreet, and IBM.