GB HealthWatch, a nutritional genomics and digital health company, has been awarded a Phase I Small Business Innovative Research (SBIR) Grant from the National Institutes of Health (NIH) to develop a mobile application that delivers personalized nutritional recommendations in the form of meal plans to those who are genetically susceptible to Alzheimer’s disease (AD). There is no cure for AD and disease pathogenesis begins decades before symptoms appear; therefore, adopting the right dietary and lifestyle changes earlier in life can be a powerful preventive strategy if they can be effectively targeted. 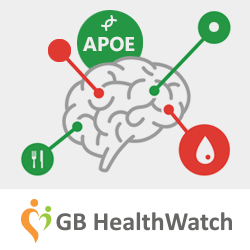 Personalized nutritional recommendations will be delivered via mobile app to prevent Alzheimer's disease in those who are genetically susceptible...

GB HealthWatch announced today that it has been awarded a Phase I Small Business Innovative Research (SBIR) grant from the National Institute on Aging, National Institutes of Health (NIH). With these funds, the company will employ sophisticated bioinformatics and statistical models to evaluate gene-nutrient interactions that contribute to the pathophysiology of Alzheimer’s disease (AD). Gene-nutrient interaction data will be extrapolated and the nutritional profiles of protective traditional diets will be used as reference to develop nutritional “prescriptions” that mimic the nutritional patterns of anti-AD diets. The company aims to develop a low-cost, evidence-based mobile app that delivers personalized recommendations in the form of meal plans to those with genetic susceptibility to AD.

AD, the most common form of dementia and sixth-leading cause of death in the US, takes an enormous toll on families and caregivers and costs the nation an estimated $200 billion a year. Though there is no cure, genetics plays a significant role in late-onset AD risk, with APOE gene alleles being the strongest risk factor. Having one or both APOE-E4 risk alleles increases risk of getting AD during one’s lifetime by 3- and 13-fold, respectively, while having the APOE-E2 protective allele reduces risk. Research has shown, however, that it is possible to significantly mitigate genetic risks with dietary and lifestyle interventions.

Notably, people in Africa with APOE-E4 alleles have lower AD risk compared to African Americans with similar genotypes, presumably because of differences in their food environments and lifestyles. A recent study found that those who consumed a diet low in saturated fat with a low glycemic index showed reduced biomarkers of AD and that this effect was more pronounced in those with APOE-E4. This study corroborates data from epidemiological studies. Other research has shown that adherents to a Mediterranean diet can lower the rate of cognitive decline, irrespective of APOE status. Beyond APOE, variants in genes involved in cholesterol, iron, folic acid and vitamin B12 metabolism are also linked with AD risk.

“We can reasonably assume that many disease-risk genetic variants were once beneficial, enabling our ancestors to adapt to specific diet and nutrient environments,” said Chifeng Ma, PhD, Lead Bioinformatics Scientist at GB HealthWatch. “Therefore, analyzing population genetics and the nutritional profiles of traditional diets in regions with the highest frequencies of disease risk variants could uncover the precise nutritional configurations required for preventing or treating such diseases. I am confident this project will lead to insightful discoveries that we can use to combat Alzheimer’s disease.””

“At GB HealthWatch, we are synthesizing evidence-based dietary and lifestyle plans to offset genetic risks using digital technology as a mode of delivery,” said Christina Troutner, MS, RDN, Research Dietitian and Nutrition Scientist at GB HealthWatch. “Our company developed the HealthWatch 360 mobile app, which tracks dietary intake, physical activity and health-related symptoms while providing interactive dietary and nutritional recommendations. The app has an established data structure and algorithms capable of providing personalized food and nutrition recommendations that can be further personalized to match individual food preferences.”

The current version of the HealthWatch 360 app allows users to select HealthWatch Goals, such as weight control, heart health and type 2 diabetes, and receive nutritional recommendations based on medical nutrition therapy (MNT) guidelines, the 2015-2020 Dietary Guidelines for Americans, and Dietary Reference Intakes by the Food and Nutrition Board, Institute of Medicine, National Academies. The app analyzes the user’s food and exercise logs and provides daily reports and a nutrition score based on their diet quality and nutritional intake. With the SBIR grant, GB HealthWatch will continue building upon their successful mobile app platform to deliver genetics-based diet and nutrition therapy.

Though the current funding from NIH supports the development of the app for AD prevention, a key outcome of the project will be a platform that supports population-wide dietary interventions for major chronic diseases by seamlessly connecting preventive health care with daily life in the digital age.

About GB HealthWatch
GB HealthWatch is a digital health and nutritional genomics company. We study gene-diet-disease interactions and develop research tools to accelerate scientific discoveries and consumer digital health applications to improve public health. Our mission is to help prevent common chronic diseases through targeted, gene-based nutritional and dietary intervention. We aim to inform people about the scientific basis of diseases, support them with nutrition management products and services, and empower them to take control and live better lives. GB HealthWatch offers the following tools:

Disclaimer: The content is solely the responsibility of the authors and does not necessarily represent the official views of the National Institutes of Health.