Judges award Gold in “Most Unique” category, Silver in “Best Ingredient Combination” and Bronze for “Top Toffee” in 2013 competition. 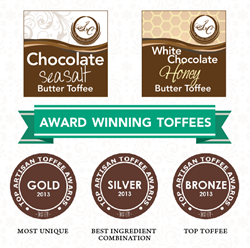 Keeping our Chocolate Sea Salt Butter Toffee clean and simple, you can almost call it an ‘honest toffee’

The Secret Chocolatier is on an award-winning streak, winning three medals in the International Chocolate Salon 2013 awards for chocolate toffee:

Submitting their two customer-tested and -approved toffees the Sea Salt Butter Toffee & the White Chocolate Honey Toffee, The Secret Chocolatier took home medals in half the categories at this year’s Toffee Awards.

“We developed our Sea Salt Butter Toffee and White Chocolate (Cloister) Honey Toffees after running them through the gauntlet of customer taste tests,” said Andy Ciordia, who takes the lead on community development on behalf of the Charlotte, NC company. “We love our customers’ palates, and vet nearly every new product with a focus group before putting it on the shelves.”

Although the judges did not specify which toffee won each award, Ciordia is sure their won in the “Most Unique” category. Made with local Cloister Honey, the creamy white chocolate balances the honey-sweetness. The Secret Chocolatier includes locally sourced ingredients, like Cloister Honey, whenever possible to keep their connection with the local farmers markets where their business began.

The International Chocolate Salon 2013 awards for chocolate toffee come on the heels of a WeddingWire Bride’s Choice Awards® 2013 earlier this year.

TasteTV reaches millions of households across the United States on over 100 television stations nationwide. Many broadcasts are also available on cable Video On Demand (VOD), available 7 days a week, 24 hours a day.

About The Secret Chocolatier
The Secret Chocolatier began operations in 2008, selling hand-made confections at regional farmers markets, sourced from natural ingredients. Owned and operated by a multiple generation family, working side by side to create a self sustaining economy for themselves.

Opening its own retail shop in 2011, at the corner of Sharon Amity and Providence Road in Charlotte, NC, the company also wholesales its goodies to retailers.