Bethany R. Lindell’s Newly Released “The Hybridian Way” Is an Electrifying Novel of Pursuit Across the Vastness of the Explored Universe

“The Hybridian Way” from Christian Faith Publishing author Bethany R. Lindell is a fast-paced chase down futuristic space lanes as one man tries to keep his revolutionary research from being exploited by corporate thieves. 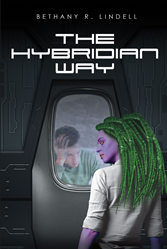 Lindell shares, “Felix Cauldwell, formerly of Earth, is too smart for his own good.

“Working on the B-class cargo hauler, Helix 7, Felix doesn’t really pay attention to the passengers on board, the crates the Helix 7 transports throughout the Known Universe, or even the planets they drop them off on. As long as he keeps the ship up and running, he’s left alone to focus on his real work—equations for near-instantaneous travel that would turn hyperspace into the slow lane.

“Knowing he isn’t the only one working on such a theory, he sequesters his work in the underbelly of the ship, not even letting his only two friends in the Known—Cor, the ship’s gray-haired Hybridian mechanic; and Tori Addison, their co-pilot and active grad student—inside his workroom.

“But locks would never stop a woman like Kla from getting in anyway.

“She offers him a job with her employer, Caladry O’Dowell, infamous inventor and owner of tech company Dowell & Stein Industries. She ignores his refusals, rejections, and all-out avoidance of her, determined to have his research. So determined in fact, Cor overhears her threatening to kill Felix if the Helix 7’s captain doesn’t steal his work right out from under him.

“With his research burned and the only copy safe inside Felix’s head, he and Cor bolt, starting a chase down the Hybridian Way that Kla is more than happy to finish…”

This book also lets readers visualize the possibilities of the universe’s expanding plane that contains realms only the mind can imagine.

View the synopsis of “The Hybridian Way” on YouTube.

Consumers can purchase “The Hybridian Way” at traditional brick-and-mortar bookstores or online at Amazon.com, Apple iTunes store, or Barnes and Noble.

For additional information or inquiries about “The Hybridian Way,” contact the Christian Faith Publishing media department at 866-554-0919.