In less than four days on Kickstarter, the SquatchIt project has passed the 25% funding mark. 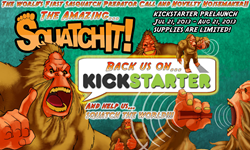 We are just over the 25% mark and we still have three quarters of the way to go. Please support the SquatchIt Kickstarter and get in on the ‘Big-Time Bigfoot Fun’!

SquatchIt has reached the twenty-five percent mark in their Kickstarter funding drive for the SquatchIt Sasquatch call and Bigfoot novelty noisemaker. With twenty-seven days to all signs are pointing to success for the initiative. In addition SquatchIt continues to hold the top featured position in Dallas, TX on the Kickstarter home page and is also listed in the national “Staff Picks” section as well.

"Howdy Folks, we at SquatchIt really appreciate all of your support in this Kickstarter campaign. We are just over the 25% mark and we still have three quarters of the way to go. Please support the SquatchIt Kickstarter and get in on the 'Big-Time Bigfoot Fun!'" says Christopher Oliver, co-inventor of the Squatchit Sasquatch Call.

SquatchIt has received the support of many popular Sasquatch and Bigfoot websites as well as celebrity praise by stars including Bob Gimlin, of 1967 Patterson-Gimlin Bigfoot film fame and Cliff Barackman co-host of "Finding Bigfoot."

SquatchIt is the world’s first Sasquatch and Bigfoot wild game call and novelty noisemaker. Designed to "Sound like a Squatch" and based on the general consensus of what many researchers believe a Sasquatch call would sound like, SquatchIt takes the idea of a battery-free novelty noisemaker to a whole new level. For more information about the Sasquatch sound device or information regarding the upcoming Kickstarter launch, visit squatchit.com.