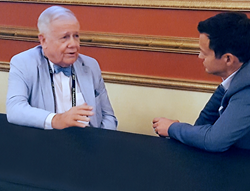 The next [financial crisis], when it comes, is going to be the worst in my lifetime.

Jim Rogers, former business partner of financial industry magnate George Soros, has warned Birch Gold Group in an exclusive interview, "I know we're going to have another [financial crisis]. What I said was, the next one, when it comes, is going to be the worst in my lifetime. 2008 was bad because there was a lot of debt. Well, the debt is much, much higher now." He continues, saying, "People talk about austerity but nobody, nobody has reduced their debt. Everybody has increased their debt. The Federal Reserve in the U.S. has more than quintupled its balance sheet alone in nine years."

He had equally compelling remarks to make about interest rates. "It's all absurd what's been happening! If 20 years ago we had said, 'Interest rates are going to go to zero and they're going to go to negative,' people would have said that's incomprehensible, it cannot happen."

"We're committed to sharing high-quality, educational information with our customers about the most pressing financial news that affects their savings," says Peter Reagan, Financial Market Strategist for Birch Gold Group. "We're thrilled with the insight that Mr. Rogers had to share with us and our customers. He has a respected and unique perspective on the true state of the U.S. economy."

From its headquarters in Burbank, California, Birch Gold Group and its 75-strong team of seasoned professionals have spent over a dozen years guiding customers across the United States in protecting their savings with precious metals, such as gold and silver. The entire interview with Jim Rogers can be viewed at: https://youtu.be/WtNpNWRnAnU

About Birch Gold Group:
Since 2003, Birch Gold Group has prided itself on educating customers to help them make the best decision for safeguarding their savings, including within a retirement account. Our team of professionals has accumulated decades of hands-on experience in the financial industry. Throughout the years, we have helped thousands of Americans move their IRA, 401(k), and other tax-advantaged retirement accounts out of stocks, bonds, and mutual funds, and into IRAs backed by physical gold and silver. It is for this reason that we consider ourselves America's Precious Metal IRA Specialists. Discover the future for your retirement by backing it with precious metals, by visiting our website: http://www.birchgold.com/